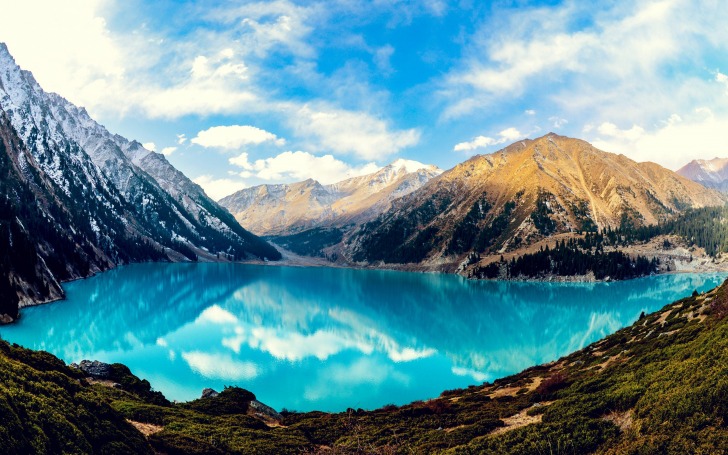 Kazakhstan - safety as a country

Almaty is the former capital of Kazakhstan and its biggest city, located in Almaty Province.

The city is a strange mix of Kazakh and post-soviet mentality, which is also reflected in the architecture and street design.

If you are lucky and the air is transparent enough, you will see a beautiful range of Tian Shan mountains, which seem to be very close to the city.

One of the most popular ski resorts is located a bit higher up in the mountains than Medeo skating rink.

It is not very cheap, but it’s always crowded with foreigners and locals.

You can also take a cable car and go all the way up to observe breathtaking views.

Overall, it is unsafe to go to Almaty, and you should be aware of dangerous areas to avoid and stay vigilant at all times for any possible dangers.

Public transportation doesn't function well in Almaty, although they do have a metro, which connects suburbs with the city center and is quite convenient in most cases. You can still run into a pickpocket, so be careful.

Pickpocketing exists in Almaty, and carrying expensive personal belongings such as phones, laptops, jewelry, and watches can only draw unwanted attention from pickpockets and thieves. Avoid this and be aware of your surroundings at all times.

There is a variety of natural disasters that represent a threat to Kazakhstan and Almaty including earthquakes, floods, mudflows, avalanches, landslides, and landfalls.

Mugging is an issue, not only in Almaty but in the entire state of Kazakhstan, it only depends on where you are. In larger cities like Almaty, there is a higher risk of getting robbed or attacked.

There is a risk of terrorists trying to carry out attacks in Kazakhstan. Attacks could be indiscriminate, including in places visited by foreigners. Stay informed and pay attention to any possible security-related announcements by the Kazakh authorities.

Scams are also common in Almaty and there are several that are already known, such as the "lost wallet scam", where an individual claims they've found a wallet and ask you if you want to share the money inside. Then their partner appears and claims it's their wallet and asks to see your purse or wallet to see if you've stolen something and then grabs your belongings or asks for more money.

When it comes to women traveling alone, they shouldn't encounter any incidents if following common sense and basic precaution measures, but they're still not advised to go out alone.

So... How Safe Is Almaty Really?

Almaty doesn’t have a high safety index which means that it’s overall unsafe to visit, as it has many different dangers to it, but if you take basic precaution measures, you can avoid them all.

As for safety in Almaty, you’ll probably encounter some problems.

Transportation, scams, petty thefts and corrupt police are just some of the issues you might face.

Smaller crimes such as pickpocketing, petty theft, etc take place in public places such as markets, heavily-crowded public transportations such as mini-buses, etc.

As for the dangerous areas, these are mostly in the Nothern part of the city (rail stations – Almaty 1, Almaty 2), as well as everything to the north of Tole Bi street, between Sain and Seifulin street.

Near ZhibekZholy station avoid going to the north of Makataev street.

Don’t linger near your hotels and accommodation, since criminals often target those places and attack tourists near them.

Worst of all, the police are easily bribed and not trustworthy.

They will often rob tourists by pretending to arrest them for being drunk in places where such behavior is illegal.

Other public officials might also try to rip you off, asking for you to pay large amounts of money for a vague violation of some kind.

How Does Almaty Compare?