How Much Does It Cost to Live In Mexico?

Mexico, in general, is not an expensive country, though, again, it depends on where you live.

The food is cheap, and so are drinks, there’s a vibrant nightlife that won’t cost you a lung, you can make delicious food with their exotic groceries and above all – live in a tropical paradise that is possibly much cheaper than your own home town.

A good thing to remember is that if you’re staying in places like Santa Fe, La Condesa or Polanco expect higher prices, especially for rent!

Mexico : Cost of Living by City

If your’re planning on dining out anywhere in Mexico and yet saving some money, prepare around 10$ for two! With this you can buy yourself even a couple of drinks. There’s always the option of street food for a couple of dollars or a large pizza, home delivered, which will cost you about 6$. A dinner at a mid-range restaurant for two can cost anywhere from 22.50$ and up.

When it comes to buying food at supermarkets, it is definitely cheaper than eating out regularly. You can always get a membership card at Walmart, which costs around 25$ each year, and then the foods cost a little less. For a family of five, for example, you’ll need around 400$ monthly at Walmart. You can also buy fresh veggies and fruit at local open markets that are common in every city.

If you prefer walking and taking the bus (or other forms of public transport), your transportation costs will be as little as 25$ or 30$ per month, and if you want to drive a car, it will definitely cost you more – around 130$ per month. Monthly pass for public transport amounts to around 17$ and a one-way ticket costs less than a dollar.

Utilities are generally cheap in Mexico! Of course, depending on the size of your apartment and the amount of electricity you spend, your bills could be higher or lower, but all in all – for an apartment of around 85m2, all basic utilities including electricity, gas, water, heating, cooling and garbage services, will cost you around 40$. Internet isn’t included in this, separately, it costs around 20$.

Indulging in sports definitely takes a considerable toll on your wallet, and this is true in Mexico too, though it is definitely less expensive than in most countries. For example, a membership in a gym or a fitness club will cost you less than 30$. Cinema tickets are much cheaper, however, costing only about 3$ each.

Shopping for clothes in Mexico is not a bad idea – it’s filled with shopping malls and the prices aren’t too high. For example, shopping for quality jeans like Levi’s will cost you around 40$, while a pair of quality running shoes of brands like Nike will cost you less than 70$ which is a reasonable price.

Rent is not through the roof in Mexico, though it’s not a bargain either. It all depends on where you want to live. If you’ve got your mind set on the center of one of the major cities, the average price will be around 300$. However, there are many charming little apartments that are a bit further away from the centers, and they cost considerably less – 200$ a month.

How Does the Average Person Spend Their Money in Mexico?

Of course – food, like in most countries and cities.

An average person living in Mexico, and having to feed his/her family, spends the biggest amount of their money in supermarkets and open “mercados”.

After food, rent is the biggest expense for people living in Mexico.

The rent isn’t the biggest problem financially for Mexican people, but it is a bit high and you have to set aside a large portion of your salary for it.

Restaurants and transportation are also significant expenses for an average person living in Mexico.

People of Mexico can find a way to manage their expenses with the salaries they get, though it probably isn’t easy.

Minimum wage for a citizen of Mexico is only 136$ which basically means that many people have to work overtime or find another job to make ends meet.

Average monthly net salary is considerably higher and allows for people to pay for most of their necessities and not have to worry about the next day.

However, if you’re wondering how much money to bring for a month in Mexico, around 1000$ would probably suffice.

What About Travel Safety in Mexico? 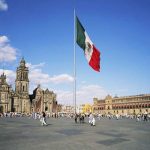 Cost of Living by City in Mexico