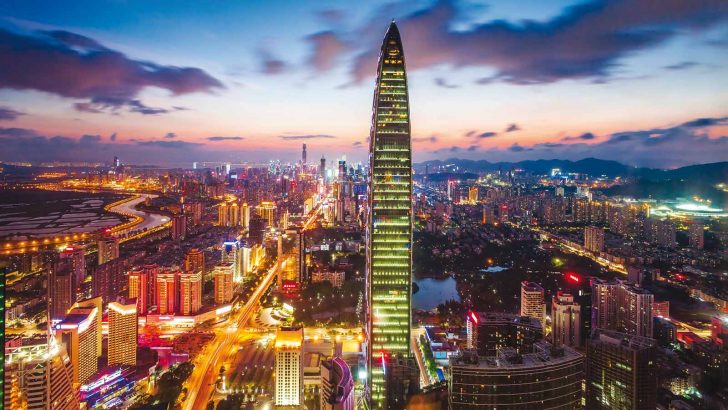 Shenzhen, as one among many well-known tourist destinations in China, is famous for various cultural, historical and architectural monuments, as well as amusement parks, which are very important for the Chinese and, at the same time, amaze people from the whole world.

The most visited sights are theme parks which are of the main interest for some tourists.

Once a small town, today it is the center of fun and shopping in China.

Shenzhen is the place that is quite safe according to Western standards, in comparison to other cities around the world with approximately the same number of tourists. Violent crime is rare, prostitution is common and pickpocket gangs are in action at the crowded areas, where foreigners are often victims. However, if they remain vigilant, they will not become easy prey.

The Shenzhen Metro is the most appropriate and safe means of transport around the Shenzhen city area because a driver would not give you problems by taking you far away from your destination, unlike the cab drivers. When choosing the taxi, look for the plastic stand on the right-hand dashboard which represents the license. Driving in Shenzhen is chaotic, so tourists need to be extremely careful when crossing the street and always use over or underpasses.

Busy and crowded areas are the main hubs of pickpocketing and purse snatching. Tourists should be careful and keep their valuables close to them in shopping centers, bus stations and particularly around the theme parks. This is an increasing problem that authorities are trying to prevent and stop.

Shenzhen, as well as the whole of China, is very prone to natural disasters like flooding, landslides and forestry fires which tend to be an important limiting factor for the economic and social growth of the country.

There were reports in Shenzhen about people being kidnapped and killed, but those were usually crime acts against citizens. The kidnapping of foreigners is rare and tourists should not be afraid when coming to Shenzhen.

Due to the history of a series of terrorist attacks by the Muslim separatist militants that have left dozens dead and wounded, there is a possibility of new ones. However, the level of this risk is low.

As in most of China, fake banknotes are a huge problem. Tourists encountered fake money even when taken from ATMs. When this kind of scam is in question, you need to be careful when taking a change and exchange money only in banks or other licensed exchange offices. Foreigners are often victims of dishonest taxi drivers that use the situation to overcharge and even steal from passengers.

Even though China is an extremely safe country in terms of female safety, solo women are advised to avoid walking alone at night and remain cautious in crowded places.

So... How Safe Is Shenzhen Really?

Shenzhen, a small town next to Hong Kong, has turned into a huge, tourist destination, not only due to its historical attractions and monuments but also for its theme parks.

With thousands of citizens and even more tourists yearly, it is not surprising to find criminal activities in Shenzhen.

Petty crime, like purse snatching and pickpocketing, are frequent, and you should pay special attention when in shopping districts or front of crowded tourist sights, like the Citizen’s Center and Lizhi Park among others.

The best thing for tourists is that the level of violent crime is extremely low, so they can relax and enjoy their experience of this amazing destination.

How Does Shenzhen Compare?