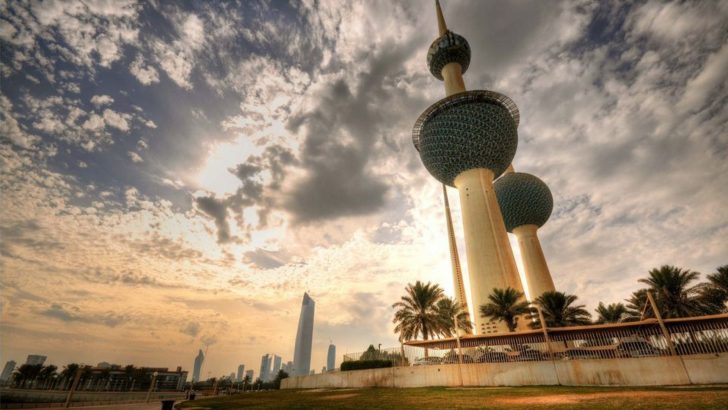 Kuwait is a country located in the Middle East, at the head of the Persian Gulf, with Iraq to the north and west, and Saudi Arabia to the southwest.

Kuwait has an important cultural heritage and its capital, Kuwait City is well known for its contemporary architecture, of which may be the best known are striking Kuwait Towers.

It is an Arabian adventure of sorts, traveling to Kuwait.

Apart from enjoying the pleasant mix of culture and contemporary looks of the country as well as fine dining, Kuwait offers plenty of things to its visitors.

It boasts some of the Middle East’s most magnificent coastline: its beaches offer a fantastic view and a place to rest by its soothing waters and the beaches are filled with beach bars and parks.

Kuwait is a safe place to travel to, the crime rates are fairly low and the possibilities of foreigners being harmed in any way or attacked are highly unlikely. However, what makes Kuwait a country with a reputation of being unsafe is terrorism risks.

Bear in mind that hailing a taxi from the road is not recommended, particularly for women. There have been reports of passengers being harassed while doing so. Try to book a taxi in advance and use a reputable taxi company, or get to know a good taxi driver to drive you around Kuwait. Never try to drive yourself as driving standards in Kuwait are extremely poor.

Petty crime is not common in Kuwait, but you should still exercise all basic precaution measures you would at home or in any other country.

When it comes to weather and environmental hazards, sand and dust storms are common and flooding can occur occasionally. Since it's a Gulf state, Kuwait often experiences extremely high temperatures, so during the hottest months, the temperature regularly reaches as high as 50ºC, sometimes even higher.

Violence towards foreigners is rare, so chances of getting mugged, attacked or kidnapped are low. However, you should avoid public gatherings or demonstrations of any kind as they can turn violent.

Terrorists are likely to try to carry out attacks in Kuwait. Attacks could be indiscriminate, including in places frequented by visitors. In June 2015, 27 people were killed, including foreigners and 227 people were injured in a terrorist attack during Friday prayers on a mosque in Kuwait during Ramadan.

Scams exist in Kuwait as much as in other destinations, so have your wits with you when interacting with locals. Double-check your change and negotiate everything in advance. Beware of young Arabs pretending to be the police. They often ask for documents like passports or civil IDs.

It is recommended for women to avoid walking alone in isolated and poorly lit areas at night and to travel with a companion if possible. Since the beginning of 2007, there have been at least three attempted sexual assaults against foreign women in Kuwait City. Two of these assaults were committed by a person posing as a police officer.

So... How Safe Is Kuwait Really?

Crime levels in Kuwait are very low, and violent crimes against travelers are extremely rare.

As a tourist, it is expected of you to respect local traditions, customs, laws, and religions at all times and be aware of your actions to make sure they do not offend other cultures or religious beliefs.

This applies particularly during the holy month of Ramadan or in religious areas.

Unless you have a death wish, stay away from driving yourself anywhere in Kuwait.

It is best that you hire a driver or find a good local taxi driver.

While the roads are good in Kuwait, the driving standards are poor and there is a general disregard for road rules and signals.

Kuwait has one of the highest traffic accident rates in the world.

Another issue in Kuwait when it comes to safety is the existence of unexploded munitions, including landmines in many rural areas, at beaches and recreational sites.

There have been reports of people being injured after picking up metal or plastic objects.

It is not recommended that you stray away from well-traveled roads and be aware that there is a danger of unexploded landmines even if an area has been officially cleared.

As for swimming in the sea off Kuwait City, it is not recommended, since there has been an incident where one of the main pumping stations in Kuwait City broke down and untreated sewage was released into the sea.

Even though the situation has been dealt with, it is still advisable to avoid swimming here.

How Does Kuwait Compare?