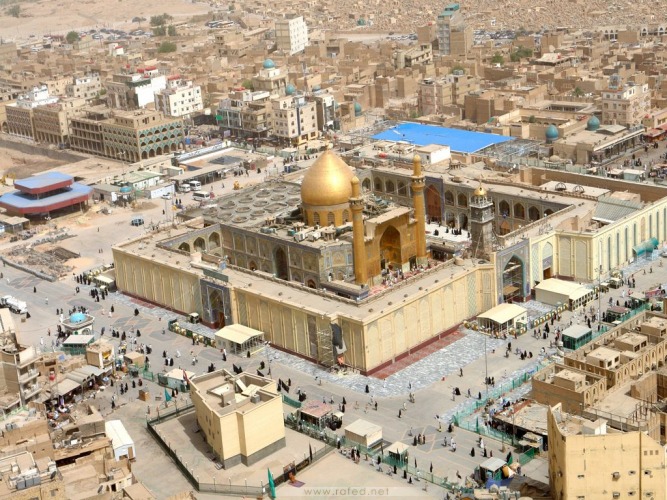 Najaf is a city in Iraq about 160 km south of Baghdad.

It is the capital of Najaf Governorate.

It is widely considered the third holiest city of Shi’a Islam and the center of Shia political power in Iraq.

The city is home to the Imam Ali Shrine and hosts millions of pilgrims yearly.

Iraq is not recommended for visiting by tourists due to military operations in the country.

However, if you plan your trip here, you can see the fantastic sights of the city: a lot of pilgrims visit thanks to the burial “Imām Alī” located here, the First Imam of Shia’s.

Najaf is not a very safe city. Its proximity to Baghdad creates a halo of insecurity over the town. If you intend to travel to this city, you should take extraordinary measures to ensure your safety and possibly even have paramilitary security.

In connection with the situation in the country and the region, it is most reliable to have your own transport to travel. It would be better if you will have armored cars with security. Cars in the city are often attacked. Take increased security measures.

Pickpockets operate in crowded places in Najaf, in bazaars, and near mosques. It is better to keep personal and precious things in the hotel safe, do not carry a lot of cash with you, and do not flash with jewelry.

Armed robberies are prevalent here. For your safety, do not travel alone, stick to groups. If you were attacked, give what you are required to save your life. Do not go out into the streets of the city at night; it is incredibly unsafe.

Do not trust street beggars and people who offer or ask for help. Any action from the local side in your direction will most likely be aimed at deceiving you. Ignore any strangers coming up to you.

Women are not recommended to travel to Najaf on their own. This is entirely unsafe. You should also wear modest clothes and be accompanied by men. Be very careful with those who contact you.

So... How Safe Is Najaf Really?

Najaf is not a safe city for traveling.

Apart from hostilities in the region, the city has a high risk of being robbed.

The main crimes in Najaf are car theft and hacking, theft of personal belongings, insults, kidnapping, drug problems, and a high level of bribery.

In the daytime, moving around the city, unaccompanied, is not safe.

Walking in the city at night is not worth to do at all.

If you intend to travel to this city, you need to take additional security measures.

People of western appearance attract more attention as a target for criminals.

Here’s also a high threat of kidnapping throughout the country, from both Daesh and other terrorist and militant groups, which can be motivated by criminality or terrorism.

You should review your security arrangements regularly and consider carefully any travel plans around the country.

Areas liberated from Daesh are likely to contain remnants of war and improvised explosive devices.

Check out trusted sources from the US and European governments with tips on staying at Najaf.

Before your trip here, carefully consider all options for the development of events and plan a safe stay in this city.

How Does Najaf Compare?