How Much Does It Cost to Live In Russia?

Russia is the largest country in the world, stretching through Eastern Europe and Northern Asia, and covering more than one-eighth of the Earth’s inhabited land area.

Of course, the fact that the country is so big means that the cost of living will vary greatly depending on where you want to live, and how.

For instance, there are many small cities and villages in Russia, that have their own grown food and crops, and people there save significant amounts of money.

However, for a decent life in such big cities as Moscow or St. Petersburg, you will need 1,000$ or more per month.

Big cities in Russia like Saint Petersburg and Moscow offer sophisticated, world class dining, but you can also eat for less money – and eat well – without going to the many western fast food chains that have opened up. Russians have their own versions of fast food restaurants where you can eat for only 7$. Mixed alcoholic beverages and beers at nightclubs are extremely expensive.

As for grocery shopping, you could go to Billa which is a bit more expensive than the others as well as Perekrestok. As for fresh fruits and vegetables, you can always buy them at one of the open markets that pop up daily all throughout the country. It’s always fresh, and usually much cheaper than the produce in supermarkets.

Public transport has been massively neglected and therefore you can see overbooked trains and buses with people crammed in a small space and that’s considered a norm. Car rental and petrol/gas, if you own a private vehicle, is relatively cheap and definitely affordable for international tourists. But the driving culture is not on a high level even though it’s cheap.

Utilities in Russia are very cheap, and for an apartment of 85m2 all basic utilities, including electricity, gas, garbage services, heating and cooling cost around 100$. Calls to landlines from mobile phones are more expensive than calls to other mobile phones. The coverage is good in urban areas and the tariffs are some of the cheapest in the world.

Russia is a country filled with natural predispositions that offer numerous chances for practicing sports outside. You can go hiking, jogging, walking and doing many other activities. However, if you’re more of an indoor type of person, you can exercise in a gym or a fitness club for around 30$ fee a month. As for other types of leisure, there are theaters and cinemas throughout the country, and a ticket for a cinema costs around 4$.

Russia is filled with gorgeous shopping malls throughout the country, like the Moscow GUM — one of the world’s most beautiful shopping malls, right on Red Square. As for the prices, they aren’t low but they aren’t through the roof either. You can buy a pair of quality jeans for around 65$, while a pair of running shoes of brands like Nike costs around 75$.

Rent isn’t too expensive, but it does largely depend on where you want to live and the size of the apartment you’re renting. It also depends on the particular city you want to live in. If you’re looking for an apartment in the center of any of the major cities, it will cost you around 400$. However, if you have your eye on any of the Russian suburbs, the price will drop to at around 250$.

How Does the Average Person Spend Their Money in Russia?

Like in most countries, the people of Russia spend the biggest part of their incomes on food and groceries.

The second biggest expense for the people living in Russia is rent, which is expected since rent is a big financial burden for any home.

Restaurants are on the third place on the list of biggest expenses here, and this makes sense too since many people eat there every day, three times a day.

Transportation is also an important financial burden for everyone since it has to be paid, whether you use your private car or public transport.

Apparel is the least of all expenses, like in most countries.

The average salary in Russia is relatively low, taking into consideration the rents and the prices of utilities, transportation and other expenses.

With an average monthly income of around 500$ you can cover all basic expenses, but you can’t save up or indulge in experiences and adventures like traveling.

Minimum wage in Russia is around 180$ and, though this isn’t staggeringly low, it definitely isn’t enough to cover all basic needs so the situation in Russia, when it comes to salaries isn’t really great.

The good thing is, though, is that in large cities of Russia you can find a good job much easier than in many other capitals and large cities around the world.

What About Travel Safety in Russia? 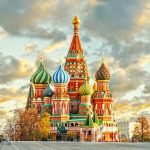 Cost of Living by City in Russia