How Much Does It Cost to Live In Saint Petersburg?

Saint Petersburg is a world-class tourist destination and Russia‘s second largest city, with a population of more than 5 million people making it also one of the most populous cities in Russia.

St. Petersburg is one of the most beautiful places on earth with a city center well known for its architecture and grand buildings.

Given that it’s one of Russia’s most important cities, and on top of that – a popular tourist destination as well – the prices here are considerably higher than what is the norm in the country.

However, what you spend solely depends on your own priorities and lifestyle.

Cost of Living in Russia

Chainaya Lozhka is a street in St. Petersburg with around 50 restaurants and here you can find fast-food restaurants that serve blini (Russian crepes) for just a couple of dollars. You can find inexpensive restaurants here where you can eat delicious Russian food for only 7$. They also have a wide selection of teas. Beer is also cheap, and coffees are bottomless.

The cost of food is ridiculously cheap in grocery stores but it depends on your preferences for food. The most expensive cut of Russian meat is tenderloin costing 4–5$ a pound. The most expensive fish is fresh Norwegian salmon for about 8$ a pound. There’s plenty of meat and fish for less than half those prices, too. Vegetables are, however, seasonal and when out of season, you can find some fruits and vegetables in open markets, but for a lot of money.

The metro is probably the nicest infrastructure of the city. The thing about St. Petersburg is that here, you don’t really need a car. Public transportation is faster, safer and cheaper than driving (a one-way ticket for public transport costs 0.60%). For most locals, having a car is considered a waste of money. Taxis are available but are much more expensive at night. Uber is a safer and cheaper method of transport than taxis.

People in St. Petersburg might consider utilities expensive, probably due to the fact that the bills skyrocket during winter (because of all the heating). However, compared to some other cities, like Moscow, utilities aren’t too expensive. For an apartment of 85m2 all basic utilities, including electricity, gas, garbage services, heating and cooling cost around 105$.

No doubt that spending free time in St. Petersburg is extremely fun, and you’ll want to spend as much of it on the streets of this city. You also might want to practice many of the outdoor activities like hiking, jogging and skating, but if you want to join a gym, be prepared to pay up around 30$. You can also indulge in many leisure activities, like going to the gym. A cinema ticket will cost you around 5$.

Clothing is very expensive here and, generally, of very poor quality, which is why Russians who are well-off go shopping in other countries. If you still want to do your shopping here, go to Gostiny Dvor – the city’s oldest and largest shopping center, where you can buy everything, but the prices are high. You can also go to Passazh, known as the Harrods of Saint Petersburg, which is a smaller, more attractive shopping center for the elite.

The flat renting is rather expensive, considerably more so than in most other cities of Russia. Rent will likely be your biggest expense here. Housing is in the form of apartments, there really are no individual houses in the city center. Apartments tend to be small. Usually, an apartment in the city center will cost around 530$ which is twice as expensive than in many other Russian cities.

How Does the Average Person Spend Their Money in Saint Petersburg?

Not surprisingly at all, with the rent prices that are sky-high in St. Petersburg, hands down the biggest expense for anyone in this city are the rents.

And no wonder, really, the rents take up almost 30% of one’s income here!

The second biggest expense for the people living in Moscow is food, which is just common sense.

Restaurants take the third place on the list of biggest expenses here and like in most places, apparel is the least of all expenses, taking up only about 4% of all expenses.

With a minimum wage of about 254$, although it’s much higher than in most other cities of Russia, many citizens of Saint Petersburg don’t have enough to cover their basic expenses.

However, for an average citizen the situation isn’t that bad, since middle class can earn enough for a relatively normal life – meaning they have everything necessary for a living.

The average monthly salary in St. Petersburg is around 650$ which is enough to lead a normal life and make ends meet.

Another good thing about St. Petersburg is that it offers much more employment chances that most other cities in Russia.

What About Travel Safety in Saint Petersburg? 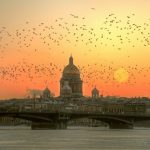 Cost of Living by City in Saint Petersburg