How Much Does It Cost to Live In Moscow?

Moscow is the 871 year-old capital of Russia and probably one of the most iconic, global cities of the world.

Moscow has played a crucial role in the development of Russia and the world, and has quite a bit of history, which you can certainly see by its many monuments and gorgeous buildings and remnants around the city.

It is also the financial and political center of Russia and the countries formerly comprising the Soviet Union.

The cost of living in Moscow ranges greatly depending on your personal preferences, but in general, and excluding housing costs, you can survive on 300-400$.

Cost of Living in Russia

New Arbat Street is one of the most important streets in Moscow, since it’s a place where the rich wine and dine. You’ll find some of Moscow’s most expensive restaurants and nightclubs here. You’ll also find some reasonably priced cafes here, so no worries if you’re on a budget. You’ll also find cheap street kiosks, although the meat served is questionable and the food has been known to make some people sick. McDonalds and KFC can be found near almost every shopping mall.

For food, people generally shop at nearby shops and get locally produced food except for some types of fruits and vegetables that aren’t grown locally. Dairy is usually bought at Vkusville. If you purchase imported goods all the time, your cost of groceries will be higher, of course. A network of supermarkets called Vkusvill can be up to two times more expensive, but all food is more natural.

The cheapest way to use the public transport in Moscow is to buy a plastic Troika re-loadable smart-card. The card costs 0.70$ and can be exchanged for cash at the end of your trip. You can refill your balance on the card at any metro station. For each trip taken, 0.50$ will be deducted from your card. This way, you can go anywhere by bus, tram, trolleybus, monorail or the cicrular city train line.

Most people living in Moscow consider utilities expensive, probably due to the fact that the bills skyrocket during winter (because of all the heating). However, compared to other capitals, utilities aren’t too expensive. For an apartment of 85m2 all basic utilities, including electricity, gas, garbage services, heating and cooling cost around 120$.

Though Moscow offers plenty of opportunities to practice sports outdoors, with its numerous forests, hiking tracks and roads, there are many people who prefer exercising inside. If you’re one of those people, a gym membership will cost you about 200$-400$ a year. If you want to take yoga classes, go to the pool or practice stretching, it can cost up to 30$ a month.

Moscow is probably the city with most shopping malls in the country. You can choose, from the Izmaylovsky Market, which is a venue with hundreds of vendors selling souvenirs, to the great GUM, where even if you don’t buy anything, you should go inside and look at the architecture. The prices are higher than anywhere else in Russia: quality jeans cost around 85$, and running sneakers are very close to 90$.

Your biggest cost in Moscow will be your accommodation. Rental properties vary quite a bit, depending on whether you want to live near a subway station or not and on the condition of the apartment. Usually, an apartment in the city center will cost around 875$ which is more than twice as expensive than in other Russian cities, while an apartment a bit more further will cost you over 500$.

How Does the Average Person Spend Their Money in Moscow?

Not surprisingly at all, with the rent prices that are sky-high in Moscow, hands down the biggest expense for anyone in this city are the rents.

And no wonder, really, the rents take up almost 40% of one’s income here!

The second biggest expense for the people living in Moscow is food, which is expected since it’s the only thing that absolutely HAS to be paid.

Restaurants are on the third place on the list of biggest expenses here – since many people eat there every day, three times a day.

The average salary in Moscow is almost twice as high than in other cities but taking into consideration the rents and the prices of utilities, transportation and other expenses, it’s not too high of a salary.

People that live in Moscow are excited and optimistic about living here, probably due to the fact that employment rate in Moscow is much higher than anywhere else, which is the norm for Russia’s big cities.

Minimum wage in Moscow is around 280$ which, although higher than in many other smaller cities of Russia, can definitely be a problem for the residents, since it isn’t even enough to cover all basic needs, let alone save up.

What About Travel Safety in Moscow? 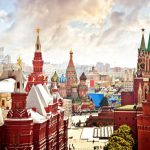 Cost of Living by City in Moscow