How Much Does It Cost to Live In Amman?

If you’re wondering where to go in Jordan, the answer is – this gorgeous city!

Amman is the place to stay if you’re going to live anywhere in Jordan, it is where all the action is.

It is also, in some ways, more expensive than most other cities in Jordan, yet in other ways it’s not: it all depends on which area of the city you live in.

However, the fact that the wages are very low and the cost of living pretty high is obvious in Amman too.

Jordan : Cost of Living by City

Cost of Living in Jordan

The cost of restaurants really depends on the area of the city where you’re staying. If you are looking to save some money, visit some of the restaurants in down town Amman that serve local dishes at a reasonable price. The most expensive meals are in restaurants located around the Dead Sea because of the lack of out-of-hotel restaurants.

Amman has a wide range of very interesting and new foods! You’ll be delighted in their supermarkets,though they do have quite enough restaurants offering European goodies. There are small grocery stores all over the place and the prices aren’t too high so cooking with their products should be fun!

Transportation isn’t really on a high level and the roads can’t handle the amount of cars people use. Having said that, the prices of transportation in Amman definitely aren’t cheep with the service they provide. If you want to take a taxi, they are reasonably priced in general. A monthly ticket for public transport is more than 40$.

Basic utilities include water, electricity, cooling and gas for heating and cooking. Be careful, because in winter, the bill for utilities can easily double. However, utilities aren’t expensive in this country: for an apartment of 85m2, they cost around 80$. In comparison to this, internet sure is expensive, at 40$ a month.

Though some aspects of living in Amman are definitely cheap, sports and leisure aren’t among them. A membership in a gym or a fitness club costs as much as 65$. The same goes for those wanting to have fun watching a movie – a ticket for a single seat in a cinema will cost you no less than a whopping 11$.

Clothes and shoes aren’t very cheap in this country. The most interesting thing is that even the simple clothing in mass chain stores like a regular shirt or a summer dress, cost as much as a pair of quality Levi’s jeans – around 70$! Quality shoes are another story: if you want Nike sneakers, prepare a 100$ bill.

Rent isn’t unreasonably high but it’s still considered expensive, taking into consideration the salaries and wages in Amman. The price of rent, naturally, varies according to what type of accommodation you chose. For instance, if you want an apartment in the city center, you’ll have to pay around 400$ and for one on the outskirts of one of the cities, around 300$.

How Does the Average Person Spend Their Money in Amman?

The biggest chunk of one’s average salary in Amman gets spent in its supermarkets, where people buy food, groceries and drinks.

It also makes sense that the percentage of the salary that goes on food is high, because the food in Amman is far from cheap.

The average person in Amman also spends their money on rent, almost as much as on restaurants.

Transportation is also vital for an average citizen of Amman though it shouldn’t be so given the fact that it’s really badly organized and should cost much less.

People in Amman have to probably think of alternate ways to make some money, because it must be hard to make ends meet with such low salaries and such a high standard of living.

For example, a minimum wage is only about 300$ which would make it literally impossible to cover all the aforementioned expenses, especially for the people who are renting an apartment.

Average monthly net salary is a little bit above 600$ which is still barely enough to cover all costs and expenses with such high prices of almost everything.

What About Travel Safety in Amman? 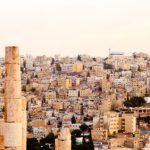