How Much Does It Cost to Live In Jordan?

Jordan is a gorgeous country and those who live here only have nice words about their homeland.

It is expensive though – wages are very low and the cost of living is quite high.

One of the things to remember is that everything around Petra costs at least 50% more than in other parts of the country, so tourists who only go there will think Jordan is very expensive indeed.

Another huge cost for tourists is traveling from one site to the next.

When it comes to everything else – prices vary.

Jordan : Cost of Living by City

The cost of restaurants really depends on the area you are staying in.

If you are staying at a resort or a hotel, like near the Dead Sea or Petra, expect to spend 15-30$ per person for a meal.

Also, don’t expect a huge selection of food because these resorts cater specifically to outside tourists.

Jordan has a wide range of very interesting and new foods!

You’ll be delighted in their supermarkets, and cooking for yourself there will probably be an adventure by itself.

There are small grocery stores all over the place and the prices aren’t too high, though supermarkets in Petra cost a bit more.

Transportation isn’t too cheap, but it isn’t expensive either.

The best option for anyone wanting to move around the country is probably to use a mixture of public transport and private taxi or share your transport with a group.

If you want to take a taxi, they are reasonably priced in general.

If you’re renting an apartment, you will get the bill for the cost of utilities separately from the rental price.

Basic utilities include water, electricity, cooling, and gas for heating and cooking.

Be careful, because, in winter, the bill for utilities can easily double.

However, utilities aren’t expensive in this country: for an apartment of 85m2, they cost around 80$.

Though some aspects of living in Jordan are definitely cheap, sports and leisure aren’t among them.

Membership in a gym or a fitness club costs as much as 53$.

The same goes for those wanting to have fun watching a movie – a ticket for a single seat in a cinema will cost you no less than a whopping 11$.

If you want to go shopping in Jordan – be warned!

Clothes and shoes aren’t very cheap in this country.

The most interesting thing is that even light pieces of clothing like a regular shirt or a summer dress cost as much as a pair of quality Levi’s jeans – around 50$!

Quality shoes are another story: if you want Nike sneakers, add another 50$ to that.

The price of the rent, naturally, varies according to what type of accommodation you chose.

For an apartment in the city center, you’ll have to pay around 300$ and for one on the outskirts of one of the cities, around 200$.

How Does the Average Person Spend Their Money in Jordan?

As usual, the biggest chunk of one’s average salary gets spent in Jordan’s supermarkets, where people buy food, groceries, and drinks.

It also makes sense that the percentage of the salary that goes on food is high because the food in Jordan isn’t cheap.

The average person in Jordan also spends a huge bulk of their money on rent, almost as much as restaurants.

Transportation is also vital for an average citizen of Jordan and right after transportation comes sports: as much as 10% of the people’s average salaries go on fitness clubs, memberships, and other types of pastimes.

It is actually shocking how people manage to make ends meet in Jordan, with such low salaries and such a high standard of living.

For example, a minimum wage is only about 366.2$ which would make it literally impossible to cover all the aforementioned expenses, especially for those who are renting an apartment.

The average monthly net salary is a little bit above 600$ which is still barely enough to cover all costs and expenses.

Tourists that visit Jordan often say that 1500$ is barely enough for a month there, but it’s doable if you really live thriftily.

What About Travel Safety in Jordan? 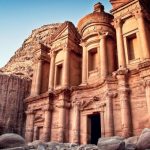 Cost of Living by City in Jordan