How Much Does It Cost to Live In Norway?

Norway, officially known as the Kingdom of Norway, is a Nordic country in Northwestern Europe.

It comprises the western part of the Scandinavian peninsula.

Norway is a country with an exceptionally high standard of living.

Compared to its neighboring countries, food in Norway can be around 50-100% more expensive.

So, if you want to go or move to Norway, be prepared that everything is ridiculously expensive in this country, and when traveling out of Norway, it will probably feel like you just gained huge piles of money, just cause you can afford a decent life as soon as you leave.

Norway : Cost of Living by City

Food can be quite expensive if you eat at a restaurant.

For example, eating in an inexpensive restaurant will cost you a bit less than 20$ – for one person.

If you want to save some money, it might be best to just have dinner at a restaurant once a month.

A meal for two at a mid-range restaurant will cost you just short of 100$.

If you want to save up some money on food, it’s not enough that you just shop at supermarkets and cook for yourself – you’ve got to shop cautiously.

This usually means asking around for shops that are cheaper and then sticking to them.

Budgeting around 300$ per month for food should be enough if you don’t have the highest standards.

Public transportation is quite expensive, even with their various discounts, so the easiest way to save money is to invest in a bicycle, though keep in mind that you’ll probably need to take the bus at some point anyway.

A one-way ticket for local transport will cost you around 4.04$ while a monthly pass for public transport is around 77.8$.

Like most other things, utilities are expensive too in Norway, though it does depend on the amount of electricity you use and on the size of your apartment.

For example, for a bit larger apartment, of about 85m2, all basic utilities like heating (very important in Norway), cooling, electricity, and gas will cost you around 213.66$.

When it comes to fitness and sports, maybe it’s best that you go hiking instead!

Just kidding, but you should know that practicing sports or going to the gym in Norway is definitely expensive.

A gym or a fitness club membership will cost you around 45$ while going to the cinema and enjoying some movie time has never been more expensive.

Prepare to pay a whopping 15$ per ticket.

Actually, since some cities are very close to the border with Sweden, a lot of people take the bus to go shopping in the neighboring country.

The prices are lower and the trip is cheap.

However, if you’re set on shopping in Norway, you should get familiar with the prices right away.

Quality jeans will cost you around 88$, and you won’t find any good running sneakers without cashing out close to 100$.

The cost of apartments varies across the country, but if you intend to rent something in the capital Oslo, you will have to pay around 600$ for a 200–350m2 room in a shared apartment, and 1200$ and upwards for a small apartment.

A spacious apartment or a house will cost you from 1900$ and upwards.

How Does the Average Person Spend Their Money in Norway?

Food is definitely the biggest expense for anyone living in Norway – though this is the situation in most countries around the world.

Food is an everyday necessity and when it’s not cheap, it amounts to a high monthly expense.

The second highest expense for an average person living in Norway is rent, with very high prices of apartments in the cities and outside of them alike.

Other significant expenses for Norwegian people are restaurants and transportation, while clothing and shoes draw the least amount of money from them.

It’s widely known around the world that Norway has some of the best salaries and best working conditions in the world.

Though there is no set minimum wage in Norway, as they differ from sector to sector and there are often different rates to distinguish skilled from unskilled work, the usual minimum wage is around 2300$ which is a decent minimum wage that most people can earn for a normal life.

An average monthly salary in Norway is well above 3,420.36$ which is absolutely enough for a comfortable life in this country.

What About Travel Safety in Norway? 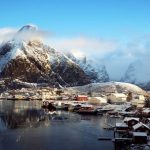 Cost of Living by City in Norway