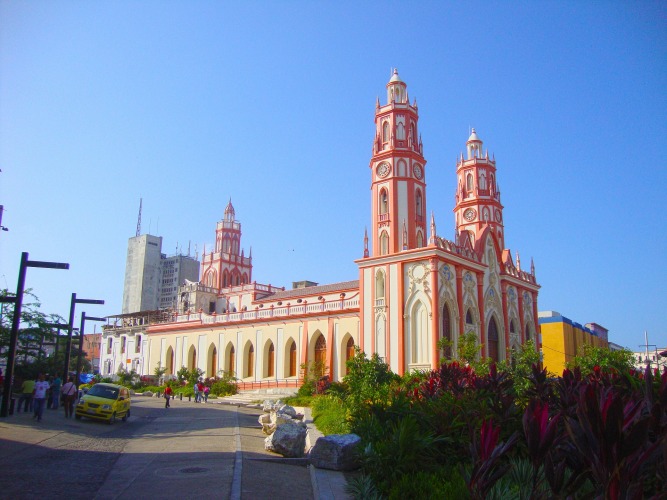 Colombia - safety as a country

However, at this time, due to COVID-19 and civil unrest, the US State Department elevated the threat to Americans, ranking Colombia as a Level 4 Do Not Travel country.

Once the situation abates itself though, you could visit Barranquilla, called the Golden Gate of Colombia, as long as you follow the Colombian advice, “No dar papaya.”

Literally translated, that means don’t give papaya and you might scratch your head, but it means don’t flash your wealth.

The people of Colombia are very poor, and it shows bad taste to show off your own money.

Therefore, they’ll target you for a crime.

Under normal conditions, Barranquilla has earned an international reputation for charm, warmth, and energy.

Think of it as the Deep South in the US, but in Colombia.

The medium-risk might seem odd, but it takes into consideration the fact that Barranquilla normally provides an important cultural experience and a peaceful area. Currently, civil unrest has made Colombia a dangerous place to visit overall. The State Department issues its rankings based upon the danger to Americans. Residents of other countries may find the government and militia groups of Colombia more amenable to them. Long a seat of major drug cartel activity, organized crime has overtaken the country. Throughout the country, its own people have experienced increased levels of homicide, extortion, armed robbery, and kidnapping. Although the government signed a peace agreement with the Revolutionary Armed Forces of Colombia (FARC), it contains many break-off factions that have refused to demobilize. The rival National Liberation Army (ELN) continues to plot terrorist attacks within the country, especially within tourist areas, government facilities, religious locations, hotels, and transportation hubs.

Despite the political unrest, you’ll probably feel at home since taxis provide a common mode of transport in the city of Barranquilla. The taxicabs provide reliable and the easiest way to hail a cab is using the app EasyTaxi. The minimum fare is $1.40 but goes up just a bit on Sundays and during the evenings after 8 pm.

Throughout the past decade, Barranquilla proved a safer place to visit. It has gone through changes though and become dangerous and violent in many areas. You are likely to get pickpocketed in Barranquilla if you flash your papaya or you look like a tourist. The only way around this is to blend in completely and avoid taking anything of value on the streets with you.

Barranquilla, Colombia experiences many dangerous natural hazards including hurricanes, tropical storms, earthquakes, volcanoes, and a rainy season that results in frequent landslides and floods. Even areas of the country that do not have a local volcano can experience issues from an eruption since the smoke and fire from the volcano travel through the atmosphere.

Muggings occur in Barranquilla frequently. You should leave all of your valuables in the hotel safe. Try to blend in and look as much like a local as possible. Consulting with your hotel’s concierge to learn directions to your destination, then memorizing them so you never need to check them can help you stay safer.

You won’t find many street scams or other rip-offs in Barranquilla, but you could get approached by someone about couriering drugs. Regardless of what you’re approached about carrying, always refuse politely and move on quickly.

According to World Nomads, women can safely travel solo to Barranquilla, Colombia. You will do better there if you speak the language and avoid vulnerable situations. This means you should always stay aware of your surroundings. Either avoid drinking or set a limit and never leave your drink unattended or accept drinks from a stranger. Women alone on the street prove a more frequent mugging target so take a taxi or walk with a friend.

In the major cities of Colombia, you can drink the water straight out of the tap. The tap water in Barranquilla, Colombia comes from the Barranquilla River. It undergoes cleaning and potabilization at a treatment plant and is transported to homes and businesses throughout Barranquilla by “clean pipes.”

Safest Places to Visit in Barranquilla

As long as you stick to touristy areas, you can stay relatively safe.

If you want to explore a typical neighborhood, choose a good neighborhood like Ciudad Jardin or Barrio El Penan.

Try the salsa clubs in San Antonio for evening entertainment since Barranquilla is considered the salsa dance capital of the world.

When choosing your accommodations, pick a hotel with a doorman in the Normandia area.

Places to Avoid in Barranquilla

Of course, every area has its neighborhoods to avoid and in Barranquilla, those include Siloe, Terron Colorado, and Aguablanca.

If a local tells you not to go to an area, stay away from it because the police in Colombia, especially Barranquilla do not service the bad neighborhoods.

Police corruption runs rampant there and those who live there and run travel blogs warn tourists that they should stick to the beaten path and tourist groups to stay safest.

Safety Tips for Traveling to Barranquilla

So... How Safe Is Barranquilla Really?

While COVID-19 has eroded safety there with respect to the health situation, the city of Barranquilla still provides a mecca of cultural attractions.

This happening little city hosts so many festivals and meetings that it really offers something for everyone.

You just have to know when to visit it.

As long as you take essential precautions, most of which you would take when visiting any major city in the US, too, you’ll be fine.

Yes, there is an enhanced risk of terrorist activity.

The breakoff groups from FARC notwithstanding though, the city provides a safe and fun place to visit and explore the culture of this South American country.

It is not a safe place for investigative journalists or foreign business people at this time.

That’s due to the political climate and the police and the people’s perception of foreign journalists.

Never wear any military-looking clothing and never insult their coffee.

The latter may seem strange since the country grows some of the finest coffee beans, but they export that.

The coffee served in most areas tastes terrible since they keep the worst for themselves.

If you order Brazilian coffee or send back your Colombian coffee, you will have insulted them.

How Does Barranquilla Compare?