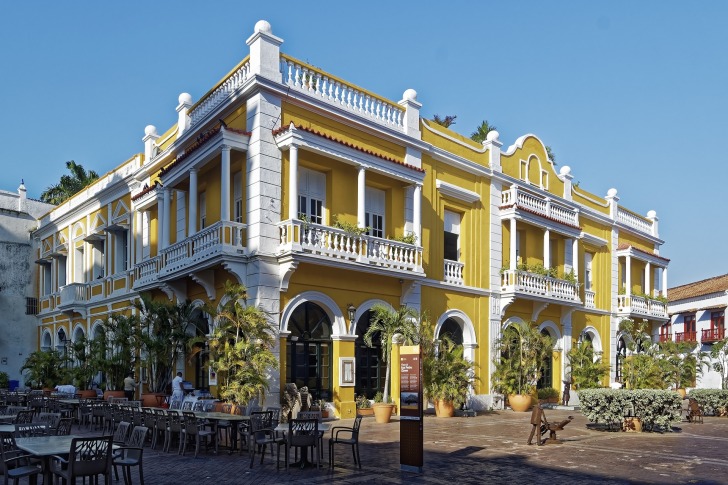 Colombia - safety as a country

Cartagena is an oceanside city and major port of the country of Colombia.

Also known as Cartagena de Indias, this city served as a trade route to the West Indies historically.

Today, Cartagena is the capital of the Bolivar Department in northern South America.

Travelers enjoy seeing the colonial buildings crowned the Jewel of the Indies while shopping and entertaining themselves at restaurants and with nightlife.

But how safe is Cartagena for traveling from the US?

Find out with our review and ratings on the safety and danger level of travel to Cartagena, Colombia.

Cartagena, Colombia is a tropical paradise located in a busy port that is full of affluent neighborhoods and culturally charming communities. Most of the areas of Cartagena are set up to support travelers and tourists and generally speaking, it is safe to travel here.

In Cartagena, the common yellow taxi cab is the most reliable and safest form of transportation to and from the beaches and resorts. Taxis can be flagged down from the street at most hours except midnight to 5 am. Note, “US citizens have been killed during robberies while using taxis,” and the US Embassy recommends using ride-sharing apps.

There have been recent reports of violent crimes involving pickpocketing. In 2021, hand grenades were used in two incidents of robbery and extortion in nearby Barranquilla. In Colombia, motorcyclists conduct drive-by raids where they grab personal belongings from victims.

Due to the tropical and coastal location, flooding is a common threat to Cartagena. However, tsunamis as a general rule are not that common and do not threaten the city.

More affluent areas are at a greater risk for mugging, especially high-profile travelers or people with jewelry or expensive electronics. Firearms are also common in Colombia, and these are used to conduct muggings and robberies. The use of intoxicating drugs slipped into beverages is also an issue in the nightlife scene. Once drugged, victims are mugged and/or sexually assaulted.

There are risks of terrorism from domestic factions including the Revolutionary Armed Forces of Colombia (FARC). This group and the National Liberation Army (ELN) have been responsible for car bombings in Bogota. While terroristic plots are not as prevalent in Cartagena, there is a concern due to the proximity.

The use of ayahuasca and other hallucinogens found in this tropical region and the Amazon as marketed as “spiritual cleansing” has attracted tourists to shamans in the rainforest. Unfortunately, this has led to reports to the US Embassy of robbery, assault, and death while intoxicated in these ceremonies.

Women traveling to Cartagena should feel safe unless they are victims of sexual assault, domestic violence, or forced marriage. There are no issues with cultural insensitivity from seeing women traveling alone in this city. That being said, women should proceed with the same air of cautious behavior they exhibit when traveling alone in the US. This includes not sharing personal information or being overly positive about everyone you meet. The person promising you a safe ride home may just as well be a kidnapper and extortionist.

To reduce the risk of water-borne infectious diseases, you should only drink bottled water or bottled beverages in Cartagena. Check to make sure the seal of the water bottle is not already broken before you drink it. Also, when at restaurants or bars, avoid getting drinks with ice added. The ice, even in the city, is often from tap water, which is problematic for the spread of infectious diseases.

Safest Places to Visit in Cartagena

Cartagena and its historical charm are best experienced in the neighborhood of Bocagrande.

This is in South Cartagena in the city center and is one of the more affluent areas to stay in.

It is convenient to beaches and islands, and boat tours often embark outside of Bocagrande.

Old Town or Casco Historico is another safe place to visit in Cartagena.

This is a UNESCO World Heritage Site that has tons of traditional Cartagena style and architecture.

Getsemani in the center of the city is another safe place, especially for solo travelers and backpackers.

Here there are more affordable accommodations, including hostels, as well as the security of the walled city.

Places to Avoid in Cartagena

Some travelers recommend staying within the walled city of Old Town as travel becomes less safe.

At the same time, due to the concentration of tourists in this area, be more cautious against scams and pickpockets, which are an issue here.

If you do travel to areas of Cartagena, not within the walls, do not walk on foot.

Use a taxi and avoid going to rural communities or villages.

Also, while Cartagena is one of the safer cities in Colombia, if you want to travel to other Colombian states, you must be cautious.

Safety Tips for Traveling to Cartagena

So... How Safe Is Cartagena Really?

Cartagena is a major urban city with a ton of historical charm.

The coastal town was founded in 1533 and is one of the oldest European cities in South and North America.

Today, it remains one of the safest places to visit in Colombia.

While Colombia has long been seen as a hot spot for cocaine and other illegal drug activities, such as ayahuasca, this is not the full spectrum for this country.

Cartagena, exclusively, is a fully vibrant tropical port city ready to host any bevy of travelers and tourists from abroad.

Whether entering the city by cruise ship or by air, this Caribbean paradise has long been a popular destination.

The city scape rivals that of New York City, and the surrounding ocean and beaches are well manicured and easy to appreciate.

This is a welcoming and safe city in northern South America that offers plenty to do and enjoy as a traveler from the US.

Plan for ample adventure thanks to the plethora of islands and beaches in this well-to-do coastal resort town.

How Does Cartagena Compare?