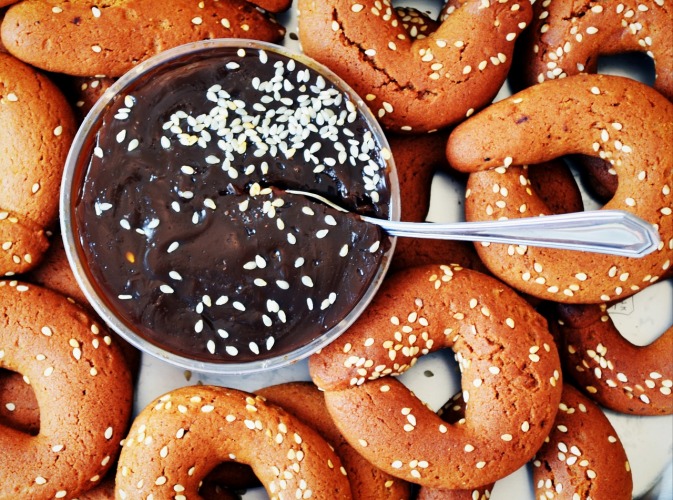 Greece is home not only for magnificent nature and ancient architecture but also for some of the most incredible desserts in the world.

No one will be surprised if you claim that Greek desserts are no less important than the Acropolis and Mount Olympus.

Full of honey, fruits, nuts, sugar, cream, and bread, they are a great reason to ditch your diet.

Just forget about those gluten and sugar issues and dig into these masterpieces of culinary.

In this article, we’ve collected some of the most amazing Greek desserts that absolutely worth trying.

This incredible dessert is made of phyllo (or filo) that is a very thin dough widely used in Greek cuisine, and oranges with cinnamon.

The combination is really delectable and unforgettable.

Locals prefer eating this delicious fluffy cake with some yogurt.

Portokalopita originates from Crete but it is popular all over the country especially during the spring when they harvest oranges.

Despite sounding way to exotic, Galaktoboureko is actually a milk pie.

It is up to you how are going to call it but the fact is that it’s really incredible while absolutely simple.

This dessert is a simple but unforgettable combination of a pastry, melted butter, and some creamy custard in syrup.

Modern Greek people serve it chilled but if you really want to enjoy it the way ancient people did, it is better to have it warm.

Baklava is one of the most famous and popular Greek desserts around the world.

In fact, this perennial classic can be considered as a synonymous for the ‘Greek Dessert’ itself.

Baklava – it is triangles made of phyllo dough and stuffed with some nuts with cinnamon and lots of sweet syrup.

This dessert is 100% perfect with its crunchiness and incredible taste.

The dessert has a long-lasting history as according to the data is was created in the Roman Empire in the 2nd century BCE.

Kataifi looks like a little bird nest and hardly resembles something eatable.

It is maid of stingy pastry that is similar to angel hair pasta.

The center of a ‘nest’ is filled with ground clove, some cinnamon, and chopped walnuts covered with lemon syrup.

If you are doing it on your own, feel free to experiment with feelings and some almonds, fruits and anything you want.

Also, it is a perfect dessert to take with you somewhere as it can be easily packed without smashing everything.

Revani is a juicy and absolutely delicious Greek cake.

Also, it is one of the most delicate Greek desserts as it has very airy texture and light, pleasant hints of citrus.

Usually, it is made with some orange zest and almonds.

Moreover, it is really easy to make so you can prepare it for some holidays or just to brighten up your weekends with something Greek.

Loukoumades can be considered as a Greek version of donuts and translated as ‘honey puffs’.

Just keep in mind, that this dessert is for sure not for addictive personalities.

These small spheres are a combination of a puffy fried dough, glistening glaze, and some powdered sugar.

The taste is absolutely delicate but don’t be surprised if you get a few pounds heavier after this delicious treat.

Melomakarona is one of the most popular holidays treats in Greece.

In fact, during holidays and festivals, people all over the country bake tones of these incredible cookies.

Melomakarona is made of flour, olive oil, honey, and chopped walnuts.

As a result, you get an incredibly tasty sweet treat that will catch your heart.