How Much Does It Cost to Live In Lima?

Lima is the capital of Peru and its largest city.

It is a huge city famous for its warm and friendly people, sublime cuisine and a vibrant street life.

How much you spend will be greatly affected by what your living standards are, but rest assured that this country can’t be considered cheap.

More or less, roughly, the cost of life in Lima is half that of a life in NY, but you can definitely find some really cheap spots and save a lot of money on necessities.

Peru : Cost of Living by City

Cost of Living in Peru

Restaurants in Lima are extremely visited since Peru has one of the best cuisines in the world. One of the good thing of Lima is that it offers such a great variety of places where you can eat, and at a low price, too! If you go to any of these, count on them being expensive, but you can also have a decent meal in a mid-range restaurant, where you’ll pay around 25$ for two. Lima, however, is far more expensive than other cities in Peru.

If you shop at a local market – and they are often cheaper, you might get grossly overcharged just for being a foreigner, and if you shop at a supermarket, you should know that they do charge more than local grocery shops, but at least they charge everybody more” If you stay away from imported food, you’ll get by relatively inexpensively.

Transportation in Lima, according to many, is among the worst of Latin America and the world. Public transport barely exists, and when it does it’s highly unreliable. Beware of taxis. There are lots of unofficial ones, which will probably overcharge you. A monthly pass for public transport in Lima is somewhere around 30$, while a one-way ticket is less than a dollar.

Utilities aren’t too expensive in Lima, though it depends on the size of your apartment. For an apartment of about 85m2, basic utilities including electricity, heating, cooling, water, gas and garbage services will amount to 50$. Internet is relatively expensive compared to that – almost 40$ per month.

Practicing sports is definitely a costly pleasure in Lima, like in most other countries. If you want a membership in a gym or a fitness center, it will cost you around 45$ which is actually more expensive than the country’s average. As for leisure and activities like going to the cinema to watch a movie, it’s relatively cheap – one cinema ticket will cost you 5$.

You’ll have numerous shopping opportunities in Lima, because it boasts some big shopping centers. As for the prices, they are below average, but still not cheap. For example, you can buy Levi’s jeans for around 45$, while a pair of running shoes of brands like Nike cost around 70$. Lighter pieces of clothing like shirts and summer dresses are around 30$.

You should know that accommodation rental in Lima will probably eat a large piece of your income. The numbers for rent can go down if you get a roommate and you can cut the extra expenses into half depending on your lifestyle. An apartment in the city center will cost you around 300$, while a bigger apartment for the whole family, also in the center, costs around 700$ – so, all in all, more expensive than in other cities of Peru.

How Does the Average Person Spend Their Money in Lima?

Like in most countries and cities, an average person living in Lima spends the biggest part of their salary on food.

Food takes up a lot more of people’s salaries than rent, which means that rent isn’t the most expensive aspect of living in Lima, but it’s definitely expensive taking into consideration an average monthly salary of an average citizen of Peru.

Like anywhere, clothing takes up an insignificant amount of money from an average person’s paycheck in Lima.

Wages in Lima are on the increase – though it depends on who you work for and if you are getting paid in cash or getting taxed.

An average monthly salary in Lima is around 400$, which is just enough to cover all expenses – if you’re not renting an apartment.

If you are, then paying all your bills and buying necessities is a bit more difficult.

Peru is a so-called “Middle Income Developing Country”, which means that, in its capital, some people live very well, while the majority lives more or less well but not as well as they would in the US.

What About Travel Safety in Lima? 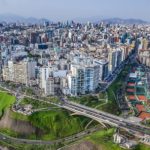