How Much Does It Cost to Live In Latvia?

Latvia can be pretty cheap as many people live with less than 1000$ here.

However, you should take into account that these are mostly young people that do not live with their families, that save on their food by eating junk and street food and sleeping in studio flats.

The cost of life in Latvia pretty much depends on what you want to do and how you want to live.

However, most people say that it’s a lovely country to live in if you can make your money elsewhere or you are looking for a European country where to retire.

Latvia : Cost of Living by City

If you want to be able to enjoy a few restaurants a week, go out in a couple of clubs and dine a couple of times a month, then you will need around 1000 dollars a month for all expenses.

Latvia is also famous for its beer which will cost you around 3.26$.

If you like to live on a rather light and cook by yourself above all, then you’ll be able to save up a huge amount of money.

However, if you are coming from a country where you can buy a bunch of fruit and vegetables for a dime, you should know that here fruit and veggies cost on average twice as in Italy, for example.

A monthly pass for all types of public transportation on all routes in Latvia is around 38.06$ on average.

Depending on where you have to go and how often, using a taxi might turn out to be much cheaper, but the best advice is to ask the locals in the city where you reside.

Parking is approximately around 3$.

Utilities are moderately priced in Latvia, and services like mobile phones and the internet can be considered inexpensive compared to the rest of Europe.

Basic utilities including electricity, heating, cooling, water and garbage services for an 85m2 apartment will probably cost you somewhere around 284.98$ which is pretty reasonable.

Practicing sports is actually cheap in Latvia, especially compared to other European countries.

If you want to be a member of a gym or a fitness club you won’t have to pay more than 40$.

Also, cinema tickets are more expensive than in many other world countries, yet less than what is European standard – 9$ a ticket.

Shopping is nowhere near as cheap as sports are, for example.

If you want to go shopping in Latvia, count on paying more than 60$ for quality jeans like Levi’s and around 80$ for quality sneakers, which is actually a European standard.

What you can buy for less money are light pieces of clothing, like shirts, for around 30$.

Rent is relatively inexpensive in Latvia, considering the paychecks its people get.

For example, it is highly possible to find an inexpensive place to live in the middle of Riga, for less than 300$ per month.

However, if you’re explicit about finding an apartment in the very center of any of Latvia’s cities, it might cost you around 400$.

How Does the Average Person Spend Their Money in Latvia?

Naturally, people in Latvia spend most of their money on food.

This is the norm in most cities around the world (except for those where rent is ridiculously through the roof).

Rent is the next aspect of life that people spend most of their money on, while restaurants are third on the list.

As per usual, transportation is among the things people have to pay and spend solid parts of their salaries on, followed by utility bills.

Spots, leisure, and clothing are aspects that are falling behind all other expenses in Latvia.

With minimum wages of around 500$, living in Latvia might be considered a bit difficult though the situation is much better than in many countries around the world.

Their average monthly net salary is around 1,026.31$, allowing them to sort out their monthly salary so as to cover all expenses and not have to worry if they’ll have enough money to eat tomorrow.

Most people claim that this country is perfect for people who want to retire, or for students, but not for working and living here, since the standard is higher than the salaries.

What About Travel Safety in Latvia? 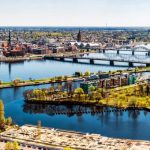 Cost of Living by City in Latvia