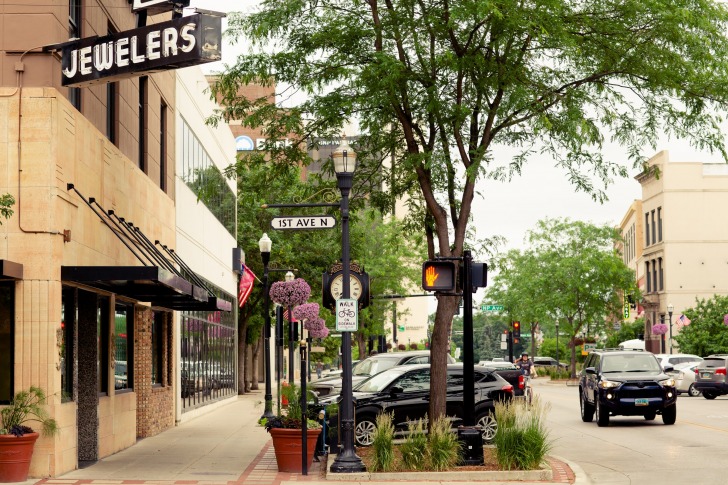 Fargo, North Dakota, was founded in 1871, almost two decades before the Dakota Territory became a state.

The city is strategically located as a stopping point for steamboat travel on the Red River and eventually the Northern Pacific Railway (NPR).

The city was named to honor William Fargo, the director of the NPR, because of the incredible growth experienced from the railroad’s arrival.

Fargo named the Gateway to the West, has also been known as the Midwest’s divorce capital due to its lenient laws regarding divorce.

Fargo is a friendly, urban metropolis that is located on North Dakota’s eastern border with Minnesota, along the Red River, which acts as the line between the cities and North Dakota & Minnesota.

Fargo’s 50 square miles is adjacent to the western banks of the Red River.

The capital of North Dakota, Bismarck, located west of Fargo near North Dakota’s center, only had a population in 2021 of 74,129.

The cities of Fargo and Moorhead are served by MATBUS and LinkFM. LinkFM offers residents and visitors a free bus route through the downtown areas of Fargo and Moorhead. In 2020, an investigation into the safety of MATBUS drivers led to a third-party contractor becoming the employing agency. This development process is ongoing and managed by METROCOG – the Fargo-Moorhead Metropolitan Council of Governments.

Pickpockets are opportunistic criminals, and their victims tend to be people who are distracted and not paying attention to their immediate surroundings. Be prepared, stay alert, and never carry anything other than what you need. What you do carry should be in an inside or front pocket. Hold your purse close to your chest, especially when walking in crowded areas.

Fargo has a lower than average risk of an earthquake, although the city has an above-average (compared to the state and country) risk for tornados. Additionally, the city has a high flood risk due to the many rivers that run near it. Flooding tends to occur in March/April.

Like most moderately sized cities, Fargo faces crime issues like muggings. Fortunately, the community considers the police responsive and visible. Assault statistics in Fargo are just above the national average at 298.2 per 100,000 residents compared to 282.7 per 100,000 residents.

Scams can be run online or in person. They have become an unfortunate part of the capitalistic society. Scams and consumer fraud are found in Fargo, North Dakota, and across the country. Some of it is perpetrated in person, and much of it is online. Consumer fraud is found in Fargo, and everywhere businesses and consumers coexist. The Fargo Police Department issues SCAM warnings as new scams emerge.

When traveling by day, women will find Fargo safe to traverse. However, it is wise to avoid those neighborhoods that you are unfamiliar with unless traveling in a group or after appropriate research. Don’t forget to take along a mobile phone in case of an emergency or even mace or a loud whistle in case of danger. Remember to stay alert to your surroundings.

The tap water in Fargo is safe for drinking. The water quality report for the city is available online, with no outstanding violations noted.

Safest Places to Visit in Fargo

Fargo has something for everyone from culture to history and beyond.

Check out the Drunken Noodle, Tailgaters Sports Bar, Mexican Village, or Bernbaum’s, among others.

For fine dining, the Prairie Kitchen is a Fargo favorite.

Desert lovers make your way to the Silver Lining Creamery, or the Black Coffee and Waffle Bar.

The Alley Fair is a downtown Fargo event that offers music, art, and food – on one stage.

Shoppers will find traditional shopping at the West Acres Shopping Center or in the walkable downtown shopping area where boutiques, vintage, antique, and gift shops offer a metro culture.

Places to Avoid in Fargo

Fargo is considered safe for a city, although travelers are not without risk of danger.

Much of the danger stems from an individual’s behavior and choices.

If you have no reason to visit sketchy places, it is smart to avoid some of the rougher neighborhoods off Main Street.

Downtown stores on Sunday remain closed until noon due to local law.

In winter, travelers to Fargo by automobile should always carry a ‘winter kit on any road or highway.

This suggestion is important because Fargo’s weather can change quickly.

Another safety tip is to make sure any car driven to Fargo has been appropriately winterized.

Safety Tips for Traveling to Fargo

So... How Safe Is Fargo Really?

By 2019, the population in North Dakota had grown nearly 13% over the past decade.

As cities go, Fargo is typical – offering both historic homes and those neighborhoods that would benefit from gentrification.

As the largest city in the Peace Garden State, Fargo is the eighth safest city in North Dakota, with nearby West Fargo ranking as the safest North Dakota city.

In addition, the North Dakota State College of Science is a two-year school that prepares students for four higher learning institutions or a technical/trade career.

How Does Fargo Compare?