How Much Does It Cost to Live In Zimbabwe?

Zimbabwe is a country located in Southern Africa.

The Victoria Falls are a major tourist attraction and the biggest source of money for this country.

However, right now Zimbabwe suffers from cash shortages and unemployment is very high, so the country is not in the best position.

Zimbabwe : Cost of Living by City

As for prices, non-imported things are very cheap – but beware: for an average tourist who likes Western products, prices are usually not that much lower than in South Africa. However, generally, the cost of everyday groceries is reasonable, that is, cheaper than eating in restaurants, so tourists living in Zimbabwe who opt to cook at home will save a considerable amount of money.

Minibus taxis are available for those interested in traveling in between cities in Zimbabwe, and are relatively inexpensive by European standards. They are cheap, but not necessarily safe. You can also catch buses that run between the cities, but they are in bad conditions even by African standards, though they are rather cheap.

If we’re speaking about Zimbabwe in general, paying bills in this country isn’t overly expensive. Taking into consideration basic monthly utilities like electricity, water, heating and cooling, it all amounts to around 90$ a month, which is affordable for a normal-sized apartment of about 85m2. Monthly internet is very expensive in comparison to that costing almost 100$.
.

If you want to spend some quality time having fun in Zimbabwe or indulging in sports activities, you’ll need to pay up. Namely, these activities are more expensive in Zimbabwe, especially renting out a tennis court per hour. Tickets for cinema, however, are less expensive than in many other countries, for instance.

Prices of clothes have increased tremendously over the years and, nowadays, they costs about the same as in the USA. One pair of jeans costs around 30$, which is less than in Europe, while quality sneakers are around 70$. You can fill up your shopping basket with light pieces of clothing in chain stores like Zara or Bershka for 30$ a piece.

How Does the Average Person Spend Their Money in Zimbabwe?

The people of Zimbabwe spend the biggest part of their salaries on food – a huge chunk of money gets spent on food, probably due to the fact that quality, imported products are considerably more expensive than the domestic ones.

Citizens of Zimbabwe don’t spend nearly as much money on the rent as they do on the food – only 16% of all income gets spent on rent.

Transportation is the next on the pie chart of necessities for the people of Zimbabwe, because even though it’s inexpensive, it’s necessary.

People also spend a lot of money on restaurants, which means there are still enough means for some people to sometimes go out and have a nice meal.

Although the economy is slowly improving, mass unemployment is still spread throughout the country.

The Victoria Falls are Zimbabwe’s most popular tourist destination and probably the only source of income for the country.

The problem of the country is that the salaries paid do not add up to the cost of living – minimum wage is only 245$.

And even though people are very optimistic as most believe in a better Zimbabwe, there’s a very high rate of unemployment: you will see lots of idle people mingling around cities.

Though the cost of living is too high, the entrepreneurs and those owning their businesses are not affected by Zimbabwe’s levels of unemployment.

What About Travel Safety in Zimbabwe? 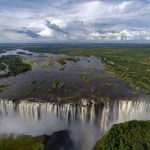 Cost of Living by City in Zimbabwe