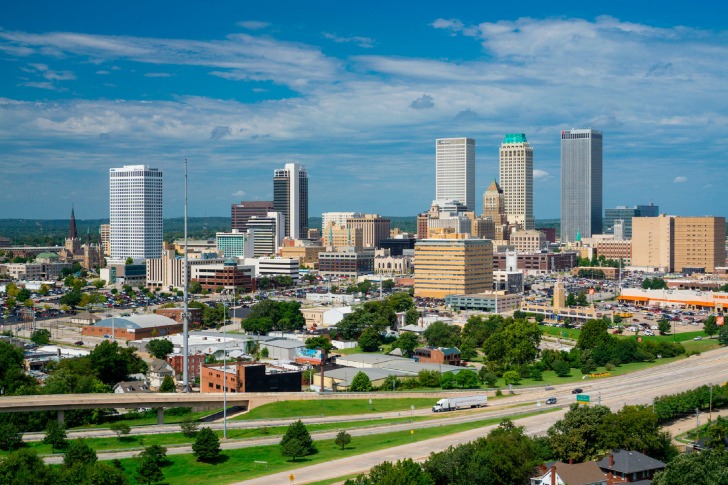 You might think of Texas when it comes to the oil industry, but it’s actually Tulsa, Oklahoma, that’s the Oil Capital of the World.

There’s even a massive Golden Driller statute to drive the point home.

Tulsa sits in the northeast corner of Oklahoma along the route between St. Louis, Missouri, and Oklahoma City.

The southwest edge of the city curves along the Arkansas River.

Tulsa somehow manages to blend an urban vibe with small-town friendliness and outdoor activities just a few miles in any direction.

Even the tourism bureau refers to it as the World’s Largest Small Town (not to be confused with the Biggest Little City in the World, which is Reno, Nevada).

The city has seen its share of ups and downs, but in 2022 it’s on an upswing.

The roller-coaster history is evident in its Art Deco design from the booming oil-rich years, and it’s also where the idea of Route 66 was born, and some icons still stand for travelers passing by or stopping to see more.

The part of Oklahoma is also in a section of the country known as “Tornado Alley,” where storm chasers flock each spring to catch massive storm systems and watch tornados drop from ominous skies.

Much of eastern Oklahoma, including Tulsa, is in what’s considered Indian Country.

That means land that is part of an Indian reservation.

Native American reservations are self-governing and policing, but this new development that reached the nation’s high court has created conflicts between native peoples and non-native people regarding crimes, prosecution, taxes, and regulatory affairs.

That doesn’t mean anything to you as a visitor, but it’s an interesting development in recent years.

While Tulsa isn't as dangerous as larger cities like St. Louis or Detroit, it is the most dangerous city in Oklahoma - even outranking the larger Oklahoma City. It's a hit-or-miss crime wave here, with some neighborhoods being very safe and others much more dangerous. Treat this with medium risk, and as a former Tulsan, I'm actually quite surprised to see what's happened in the 20 or so years since I lived there.

Tulsa Transit is the public transportation here with a fixed-route bus service. Taxis and rideshares are available, but this is an area where having a car is ideal. If you plan to use the bus system, review the Security & Safety section of the transit website.

Just 42 of the nearly 12,000 thefts here were pickpockets. Use extra caution in the downtown area since the crowds are bigger than in other areas. The real safety steps should be protecting your car from theft, as 43% of thefts are car burglaries. We'll talk about the safety steps for that shortly.

Severe storm forecasts should be taken very seriously here. While the good people of Oklahoma are used to big storms (some even go outside to watch them), you should follow the National Weather Service and Emergency Management advice to be Storm Safe. Tornadoes can be highly destructive in Oklahoma. Winter can bring snow storms, but this region is along an invisible line where more ice storms are likely. Tulsa is surprisingly hilly if you've never been there. I remember one storm in 2001 when the police scanners declared, "All hills in Tulsa are closed to traffic" because of a large winter storm.

The robbery rate is nearly twice the national average, but just 18% of those happen against strangers. If you're staying out of the crime hot spots and using common safety steps, this shouldn't be a big risk for you. However, be aware there is potential.

With a population of just over 413,000 people, the size of the city isn't going to be a potential target for terrorism. You might want to study the Tulsa Race Riots of 1921 just to be aware of an awful moment in the city's history. That topic comes up a lot if you're looking for "Terrorism Tulsa" on Google. However, there's a low risk for the average tourist in 2022 and beyond.

The biggest scam going around Tulsa is scammers posing as sheriff's deputies and demanding payment "or else," but that's a scam targeted at locals. You should avoid anyone who offers a deal too good to be true or someone who asks you to buy gift cards in exchange for payment.

As long as women follow basic safety guidelines, like not walking around downtown alone at night and avoiding crime hot spots, there's no more of a risk than for any other gender. (We'll discuss the crime hot spots a few sections down.)

The 2021 Water Quality Report shows no violations and full compliance in all categories. If you have questions closer to your visit, call (918)591-4378.

Safest Places to Visit in Tulsa

VisitTulsa.com is a website created in collaboration between Tulsa Regional Tourism, Tulsa Convention, and the Visitors Bureau.

Visitor Guides are produced by season and are available for download without having to give any personal information.

You can also watch videos on the YouTube channel Explore Tulsa.

Route 66 Historical Village offers so many Instagram opportunities in one place, plus nostalgia for the “Mother Road” of Route 66 that went all the way to the West Coast.

From neon signs to the largest oil derrick in the country, this is a safe place to explore with a lot of history about Tulsa County.

Tours of Tulsa offer various options for those who like the safety of group exploration.

The tours are led by an expert in each category, whether it’s history, art deco, churches, or food.

There’s even an underground tunnel tour!

One popular place to stop is known as ‘The Center of the Universe,’ at East 1st Street and S. Boston Avenue.

If you go to a specific location in an unimpressive circle of bricks, some acoustic phenomenon sends your voice back to you much louder than you spoke.

If you see people standing on a brick and screaming, that’s why.

You’ll be tempted to do it too!

Nearby, you’ll find the Philbrook Art Museum and the Woody Guthrie Center.

I recommend the John Hope Franklin Reconciliation Park, where the Tulsa Race Riots are explained in detail, and the history of Black Wall Street is explained.

Memorials are on display here, as well as a call for reconciliation and acknowledgment of this tragedy, which went largely ignored on the national news until 2021 when the Mayor apologized for the city’s role.

Fans of the 1982 movie The Outsiders will want to see the house where the movie was focused and tour the museum that now stands there.

It’s only open Friday through Sunday.

You can walk in the steps of the Curtis Brothers and even schedule a VIP screening of the movie with up to nine of your closest friends.

Tulsa also has a zoo and botanical garden.

Oral Roberts University is in Tulsa, and many people stop by to see the World’s Largest Praying Hands standing 60 feet tall.

This is right off the main road, so you don’t have to look hard to find it.

There are casinos in Tulsa, but they are on Tribal Land and can literally play by different rules.

It’s worth noting that as you travel around Tulsa, you likely won’t notice that you are going on and off Tribal Land.

Places to Avoid in Tulsa

The Tulsa Police Department (TPD) released a “Hot Spots” map in early 2022 to show the neighborhoods with the highest crime rates.

A special crime reductive initiative was also implemented near 61st and Memorial.

While most of the high-crime areas are near major interstate and highway intersections, there’s a particularly large hot spot on the city’s southwest side just east of the river.

Check the TPD website before you visit to see if the hot spots have changed.

With many things to do alongside the river, you want to ensure you’re visiting a safe part.

For example, The Gathering Place is a local park at the river’s edge, but it’s not in one of the crime hot spots, so families should feel safe visiting that area.

Avoid any kind of outdoor activity, wilderness exploration, or camping without bringing a battery-powered weather radio.

These devices are literal lifesavers when the power goes out, and cell towers go down during storms.

They are also helpful if you’re out of mobile phone range while storms are developing.

Safety Tips for Traveling to Tulsa

So... How Safe Is Tulsa Really?

Tulsa is seeing the same increase in violent crime and gun crime that many large cities are seeing.

Even the nearby community of Broken Arrow, considered to be one of the more affluent communities, recently had a murder-suicide where six children were killed.

You’ll find information online about the political season of 2022 and how one candidate claimed the violent crime rate in Oklahoma is worse than in New York or California.

It’s important to note that crime data is done as “Crime per 100,000 people” in an effort to make it more consistent across the board.

When researching, avoid any article that was related to an election or politics.

While living in Tulsa might have a different “How Safe Is Tulsa Really?” answer, visitors should mostly realize this isn’t a medium-sized city in the heart of the country with excellent safety.

Crime has been rising for several years now, with 2021 having violent crime rates 2.7 times the national average.

However, regarding crimes against strangers, just 37% of violent crimes were between people who didn’t know each other, and 18% of robberies were “highway robberies.”

If you stay in the entertainment, art, and parks, you’ll likely never see the underbelly of crime here.

Limiting time out after dark, especially in downtown and along the river, is another smart idea.

A lot of your crime risk here is focused on “If you don’t go looking for trouble, you probably won’t find it.”

Use common sense, crime mapping tools, and trust your gut when visiting Tulsa.

How Does Tulsa Compare?