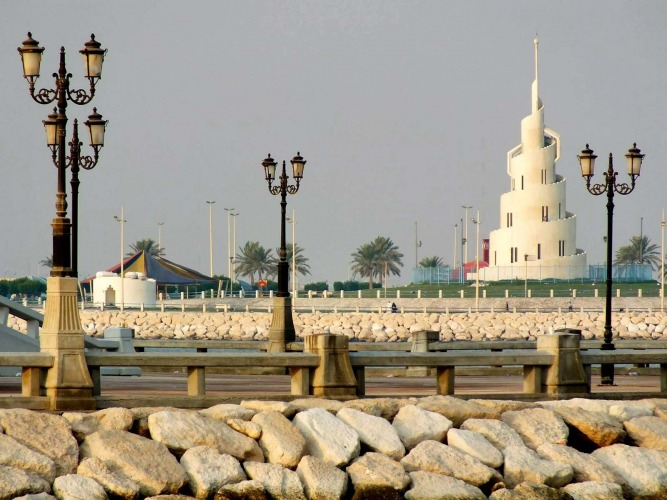 Ad Dammam is the capital of the Eastern Province of Saudi Arabia.

Here located the judicial and administrative bodies of the province, plus several government departments.

Ad Dammam is the largest city in the Eastern Province and the sixth-largest in Saudi.

Beautiful sightseeing travelers could see are: Dammam Corniche is basically a green park facing the gulf; Al Morjan island is a small artificial island with a monument in the center, it is located as an extension to the Corniche; Flagpole – is the tallest flagpole in the kingdom.

Here you can take a picture next to the 60-meter-high flagpole.

Ad Dammam is mainly safe but you should respect local rules. Disrespecting their moral codes will be followed by severe punishments.

Public transport is not good enough. Taxis and "dubbabs" dominate the market, and are usually used by the lower scale foreign workers.

Pickpockets are especially active during pilgrimages and in touristic places. Avoid wear on yourself too much jewelry and keep your money in a hidden place, not easily accessible by pickpockets.

Sandstorms and thunderstorms are very common here. You also should be aware of high temperatures in the summer months. It is a strong recommendation to have a bottle of water with you every time.

Usually, robbery and kidnapping are not common in the region, however, on the outskirts of the city and especially if you are a woman you need to be careful.

This region not very safe of terrorism due to the proximity of ISIL/Daesh. Terrorists are very likely to carry out attacks in Ad Dammam. Remain vigilant and aware of your surroundings at all times.

There is practically no fraud, but be careful with credit cards at ATM, there is a slight chance of scam.

Women traveling to Ad Dammam should be very cautioned, wear an abaya at all times or very modest clothes, that is cover all the body. Not recommended being alone in most places.

So... How Safe Is Ad Dammam Really?

Saudi Arabia was one of the most closed countries for foreigners in the world.

Now the country opens for travelers.

But you should know:
Many of the Saudis in Ad Dammam do not like foreigners, especially Westerners.

So, in order to avoid conflict, present yourself in a good way.

If you rent a car and drive here – always be respectful of other drivers.

You should also be aware of what you talk about around locals.

There are many taboo issues, so do not talk about liquor, drugs, or sex, even to fellow tourists.

Also, do not talk about your wives or daughters.

Women are not viewed highly in the culture, so, you shouldn’t talk about women here.

Always try to be diplomatic about what you discuss.

It is dangerous to be critical of Saudi Arabia, especially when talking to locals in Ad Dammam.

But you can still enjoy your time in Ad Dammam if you are polite and do not violate the cultural rules.

How Does Ad Dammam Compare?