How Much Does It Cost to Live In Brasov?

Brașov is a mountain resort city in Romania‘s most popular tourist spot – Transylvania.

It is located almost in the center of the country and surrounded by the Carpathian Mountains.

Brasov is somewhat small so don’t expect the busy life of larger cities or what you might encounter in Bucharest, for example.

It also has quite a strong economy, with tons of manufacturing companies, building investors and an overall high level of living and education.

The cost of living in Brasov is lower than in Romania’s major cities, but so are the wages.

The food in Brasov, like in most Romanian cities, is amazing. The food you’ll try in its restaurants is delicious, made locally and is very fresh. Prices are the cheapest in Europe, and beer and wine are also very cheap. Many people say that it’s impossible to get out of Romania without gaining weight. A meal at an inexpensive restaurant in Brasov will cost you around 6$.

Oh yes, fresh produce – the best thing about living in Romania! Most of the organic food in Brasov is very cheap. You can find tasty organically-farmed fruits and vegetables in special markets in all cities throughout the city. Groceries in supermarkets are priced like in the rest of Europe, but they are of a much higher quality – the fruit and veggies will actually taste rich! During summer, try fresh fruit directly from the street vendors and farmers!

Brasov has the best traffic for a city of its size in Romania. You can easily pass the city in 20 minutes, and you can drive to any part of the city in less than that. However, renting a car would be quite expensive. Take a taxi only from the authorized companies: the price should be between 030$ and 0.80$ per kilometer.

The fast internet in Brasov – and internet is fast everywhere in Romania – is extremely cheap, and basic utilities are too – to some degree. Bear in mind, however, that the presence of internet and basic utilities exists to a lesser degree in rural areas than in the cities, so if you live on the outskirts of Brasov, expect some blackouts or disruptions. But since Brasov is a city in Transylvania near Dracula’s castle, this may add to its overall spooky vibe!

Like most cities in Romania, Brasov too has many natural resorts for practicing sports outside, usually for winter sports. Poiana Brasov is a nice mountain resort, where you can go skiing, if there is snow. However, if you’re more of an indoor person, you can become a member of a gym or fitness club for around 30$.

Brasov has many shops and some shopping malls, with a range of Western stores and brands where you can shop for your favorite clothes and shoes. The prices aren’t exactly low (which you might expect from a country located in the eastern part of Europe), but they aren’t sky-high either. For instance, you can buy quality jeans for around 50$, and running sneakers for only 67$.

The renting in Brasov is a lesser burden – financially, in comparison to the country’s average and you can find an apartment with 2 rooms for only 170$ a month. Rents are not cheap, however, and you can find apartments with more or less similar costs as in Bucharest. If you want an apartment in the center of Brasov, count on paying around 300$, and for a bigger apartment (if you have a family), add another 100$ to that.

How Does the Average Person Spend Their Money in Brasov?

As in most countries of the world, the biggest expense for the people of Brasov is food and groceries – around 30% of one’s income gets spent on food.

The second biggest expense is rent, since it’s relatively high though not as high as in more developed countries of Europe.

Transportation expenses and going to restaurants are equally as important for the people of Brasov, since they spend about 15% of their salaries on each.

Utilities have a very low percentage on this pie chart of expenses, which means that Romania has low prices of electricity!

The wages in Brasov are pretty low outside of finance and software development, although they are rapidly increasing like the economy.

Ever since Romania joined EU, the wages have been growing, but they are still on the lower side.

Their average monthly net salary is near 650$ which is enough to cover all expenses, but could still mean a bit of struggle for someone who’s renting.

Minimum wage in Brasov is around 350$, which is still not staggeringly low and allows for citizens to afford all of the basics.

What About Travel Safety in Brasov? 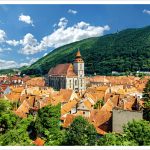 Cost of Living by City in Brasov