How Much Does It Cost to Live In Naples?

Similar to other southern Italian cities, the cost of living in Naples is much lower than in Rome, Milan and Florence. However, the average monthly salary is very low in this city, resulting in less purchasing traffic.

Even renting in Naples is up to 50% cheaper than Rome.

All other aspects like groceries, eating out and transport are also much less than other major cities worldwide.

Even though Naples has the fourth largest economy in Italy, the closure of a number of factories, unemployment that is on the rise and corruption have affected the city’s productivity greatly.

Italy : Cost of Living by City

Cost of Living in Italy

Naples is famous for the low prices of food, which by no means affects the quality of food. It is still the city of the best restaurants, food and wine. But if you want to save some money, even though restaurants are cheap, you can always order a pizza that ranges between 3$ and 9$, or a pasta, or even a cheaper a beer for around 3$.

If you plan on cooking, take advantage of the fact that you’re in Naples and buy a bulk of their pasta, it’s cheap and will definitely keep you satiated. A kilo of pasta is around 2$ and tomato sauce is 1$ for 700m. You should also know that supermarkets keep basically the same prices as all the other stores along the country.

Transportation is also cheaper than in other cities. It’s still as badly organized – for example, on working days there’s a bunch of people just not working, like taxi drivers, and if there’s an important football match – just forget about going anywhere. But, it’s still cheap and your cost of moving around Naples should be, in general, manageable.

For an apartment around 85m2 (which is definitely bigger than a usual apartment for one or two people) utilities will cost you 180$ approximately, which is actually more than in many other (major) cities of Italy. Utilities include gas, electricity, heating, cooling and garbage services and if you’re living in a one-bedroom apartment, be prepared to pay over 100$.

If you’re in Naples, you’re going to want to have some fun, or even enjoy some kind of sport. However, you should know that this is definitely expensive in Naples. A membership at the gym or a fitness club can’t go by without you cashing out around 50$, and if you want to go to the cinema, add to that another 8$ per person.

If you want to go shopping anywhere in Italy, Naples is a place for that. It is definitely cheaper to go shopping here because you can find the same pieces of clothing for up to 20$ less – each. For examples, a pair of Levi’s jeans costs around 60$, quality sneakers around 70$ and light dresses and shirts only 20$.

Renting in Naples is up to 50% cheaper than Rome. For example, you will pay an average 600$ a month for a one to three bedroom apartment in the city center. Outside the center, a one-bedroom property is an average 400$. These prices are actually very low in comparison with other Italian cities.

How Does the Average Person Spend Their Money in Naples?

In Naples, its citizens spend most money on food, in markets and grocery stores – no less than 150$ a week goes on groceries alone, if you have a family and not living as a student.

Next on the list of biggest expenses in Naples is rent, though it is rather cheap when compared to other cities.

Restaurants and transportation go side by side like in most countries – though if you stick to pizzas and pastas, you won’t pay that much (but count on gaining a couple of pounds).

Both minimum wage and average net salary are much lower in Naples than in other cities of Italy.

This happened after the closure of a number of factories, and the following onset of corruption and unemployment.

Still, the city of Naples keeps on fighting and its citizens are able to make ends meet, because their expenses are lower too.

Average monthly salary amounts to around 1200$ which makes it somewhat acceptable for an average citizen of Naples to pay their bills and live a normal life without stress.

What About Travel Safety in Naples? 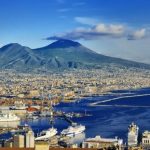 Cost of Living by City in Naples