How Much Does It Cost to Live In Timisoara?

Timişoara is a university city and its importance stems from the fact that it’s an industrial center in western Romania.

It is often referred to as the most cosmopolitan city in Romania.

It is also commonly called “the city of roses and parks” because of its many green surfaces and some even call it “little Vienna” because of its lavish architecture similar to the Austrian capital.

Timisoara is also a major academic center thanks to its many universities and large student population.

With its young and hip spirit, come the low prices – at least lower than in some major cities like Bucharest.

Depending on where you’re coming from, you will find that the prices of restaurants in Timisoara are not at all expensive compared to similar places in western Europe, US or Canada. You can have a fixed lunch menu for 8$ that includes 2 courses, water and coffee. Or you can choose the fixed dinner menu for 15$ that includes a snack, a starter, a main course, dessert, water and coffee.

Check the traditional open markets in the city for the best food. They are open daily all around the city, and here you’ll find fresh local products, healthier than the ones in supermarkets, and usually cheaper, too. If you prefer supermarkets or imported foods, there are several large/medium supermarkets you can shop in, including Kaufland, Billa, Aldi, Lidl and Profi.

Transportation is really cheap in Timisaoara, though not really necessary since everything is within walking distance here. Keep in mind that the taxis licensed by the City Hall have a distinctive oval black sticker on the backseat doors. Scam taxis have a sign on top of the car, saying ‘Taxi’ without the name of the taxi company. These taxis are twice as expensive, but they are also legal, so be careful. In Timisoara there is a ridiculously cheap bicycle system called VeloTM since this is the most bicycle friendly town in Romania.

Average cost for all utilities (meaning sewerage, water, gas, building management, garbage, electricity, TV and internet) in an 85m2 apartment in Timisoara would be at around 100$ per month in the summer months and 250$ in the winter months. Don’t forget the speed-of-light internet in Timisoara, like in the rest of Romania. You can get 1GB/s download speed for about 8$ every month.

Being close to ski resorts and great nature and hiking trails, you’ll have plenty of chances to practice sports outside and have some fun times. If you enjoy hiking and outdoors in general, Timisoara is a great place to be. Mountains are close to you and the air is fresh – what else do you need for a great hike? However, if you like sports indoor more, a gym membership will cost you around 30$.

If you like shopping, Iulius Mall is the place to visit. It’s one of the biggest shopping malls in Eastern Europe, and you can find many Romanian and international brands, fast food restaurants and a Cinema City multiplex there. Prices are pretty low, so you can buy quality jeans for around 50$, and running sneakers for only 65$.

Rents in Timisoara are actually a lot lower than in other popular Transylvania cities due to the fact that it hasn’t been hit by tourism. You can find places where you’ll pay around 250$ for a one-bedroom apartment – if it’s far from the center, while anything above 300$ means you’ll probably be located in the best part of the city. A larger apartment for the whole family, in the city center is over 560$.

How Does the Average Person Spend Their Money in Timisoara?

It’s no surprise that people in Timisoara spend most of their money on food and groceries – that’s the situation mostly anywhere in the world.

The interesting thing here is that many smaller cities in Romania have rent prices so low, that they’re monthly cost is very close to the monthly cost for transportation or restaurant expenses.

That’s the case with Timisoara, too.

The percentages for restaurants and transportation are very similar, so the amount of money people spend on both of these are almost the same.

With low prices usually come the low wages and salaries, and this is the case in Timisoara, too.

Average monthly net salary per capita in Timisoara is less than 600$, which is actually closer to a minimum wage in many other Romanian cities.

With this kind of income, it is definitely hard to lead a comfortable, quality life where you can actually save up for your future because this salary is just enough to cover all basic expenses and not have to worry about tomorrow.

Minimum wage in Timisoara is around 300$ – which is pretty low.

What About Travel Safety in Timisoara? 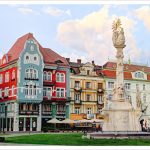 Cost of Living by City in Timisoara