How Much Does It Cost to Live In Cluj-Napoca?

Cluj-Napoca , as capital of historical region Transylvania, is one of the most visited cities in Romania.

It’s actually a must-visit destination for those who want to see urban Transylvanian life at its best.

The great thing about Cluj is that it has this young spirit, since a huge percent of the population is made out of university students, coming over, mostly, from all over Transylvania.

This is why there are always interesting, new people around with a lot of positive energy.

One more cherry on top – the city is considerably cheaper than most other major cities of Romania.

Cluj cuisine is some of the best in Romania. Ranging from traditional Romanian, Hungarian and Transylvanian, there is a number of diners and restaurants where you can try Romania’s most delicious food. Here you can find everything, from fancy restaurants, as well as local fast food shops and international chains like McDonald’s and Pizza Hut.

Stores and supermarkets are open until late in a hip city like Cluj, even during weekends – and offer a variety of groceries, all kinds of cheese, milk, yogurt etc. You can find tasty organically-farmed fruits and vegetables in special markets in all cities throughout the city. During summer, try fresh fruit directly from the street vendors and farmers – and they will be very cheap!

Taxis are relatively more expensive in Cluj than in other parts of Romania, but still cheap by European levels, and very convenient. Uber is actually more expensive than regular taxis, so your best bet is to use CleverTaxi app for taxi services. Public transport is far from reliable in Cluj, but it’s still very cheap. A one-way ticket for public transport is around 0.60$.

Average cost for all utilities (meaning sewerage, water, gas, building management, garbage, electricity, TV and internet) in an 85m2 apartment in Cluj would be at around 103$ per month in the summer months and 250$ per month in the winter months. Internet speed is lightning fast in Cluj, like in the rest of Romania. You can get 1GB/s download speed for about 9$ every month.

Like most cities in Romaania, Cluj too has many natural resorts for practicing sports outside. You can go for a ride with your bike in the city or go for a walk anywhere around the city. However, if you’re more of an indoor person, you can become a member of a gym or fitness club for around 30$. There are also many cinemas in Cluj, and they cost around 5$ per ticket.

Cluj-Napoca is one of the best cities in Romania for shopping! It has two of the largest malls: Iulius Mall and Polus Center, and then there’s also Sora Shopping Center, Central and Galeriile Ferdinand. There are also many smaller shops in the city center (especially in the Mihai Viteazu Square area) and Marasti Square. In Cluj, you can buy quality jeans for around 60$, and running sneakers for only 70$.

Rents in Cluj can get high, but they don’t come anywhere close to those that you’d encounter in London or other large cities in Western Europe. Rent will, however, be your main concern while living here. You can find places where you’ll pay 120$ for a studio – if it’s far from the center, while anything above 400$ means you’re probably located in the best part of the city. A larger apartment for the whole family, in the city center is over 700$.

How Does the Average Person Spend Their Money in Cluj-Napoca?

The biggest expense for the people of Cluj-Napoca is food and groceries – they take up 30% of one’s income.

Rent in Cluj is relatively high though not as high as in more developed countries of Europe, which is why rent is the second biggest expense for the people of this city.

Utilities have a very low percentage on this pie chart of expenses, with only 0.1% more than paying for sports.

The wages in Cluj are pretty low like in most of Romania, although they are rapidly increasing like the economy.

Namely, ever since Romania joined EU, the wages have been growing, but they are still on the lower side.

The average monthly net salary in Cluj is around 650$ which is definitely good enough to cover all your basic expenses.

Minimum wage in Cluj, in turn, is around 500$, which is still not staggeringly low but could still mean quite a bit of struggle for someone who’s renting.

What About Travel Safety in Cluj-Napoca? 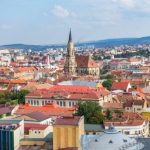 Cost of Living by City in Cluj-Napoca