How Much Does It Cost to Live In North Macedonia?

North Macedonia is generally not an expensive country, compared to others in its vicinity, and even less so compared to tourist destinations and popular cities around Europe like London, Paris, or Rome.

You can rent an apartment for around 200$ there, eat out for less than a dollar (if you’re into street food), and even utilities are cheap.

The best thing about North Macedonia is that it has Ohrid – one of the favorite destinations in Europe during summer.

It’s a city with the gorgeous Ohrid lake, that attracts many tourists each year, and the prices even there are pretty low.

As mentioned before, restaurants and eating out in North Macedonia are very affordable.

You can eat at a mid-range restaurant for 21.21$ for two people!

If you like fast food you will not pay more than $3.53 for a burger.

Pizzas in restaurants are $3 and beer is around $2.

If you want some soft drinks or a coffee add another $1.

When you go grocery shopping, bring around 25$ and you’ll be able to eat for probably a whole week.

Though restaurants are definitely cheap in this country, cooking at home will save you a lot of money, since all of the basic groceries cost less than a dollar.

Ask the locals about the cheapest supermarkets.

Public transport is definitely not organized well and you can’t count on it really, but at least it’s cheap!

The buses are somewhat late but you can mostly catch one with just a bit of waiting.

A one-way ticket for public transport is less than a dollar, and a monthly pass costs less than 30$ which can be considered a reasonable price.

Utilities (water, gas, heating, cooling, and electricity) can be around 50$ per month if you’re renting a really small apartment.

If the apartment is larger, around 85m2, it will cost you around 100$ and if there’s central heating, add 25$-45$ more per month (but it really depends on the size of the apartment).

Being a member of a fitness club or a gym isn’t expensive either in North Macedonia.

Membership in either one will cost you around 22$ which is incredibly cheap, considering the prices in the rest of Europe.

Cinema tickets are also not expensive – not cheap either, mind you – but not expensive, costing around 5$ each.

Shopping is definitely recommended for anyone who wanders off to North Macedonia.

It is very cheap and North Macedonia has many shopping malls where you can have a good time.

You can buy yourself some quality jeans like Levi’s for just a bit more than 50$, while quality running sneakers will cost you around 70$.

The price of rent depends on what you want and prefer.

If you live alone you can rent a fully furnished studio for about $200 or a one-bedroom apartment for $250.

Two-bedroom apartments are $250 and if you’re looking for that apartment to be in the city center, then it costs well above 300$.

How Does the Average Person Spend Their Money in North Macedonia?

Food is definitely the number one thing people spend their money on in North Macedonia, like in most countries.

The next expense that draws the most funds from the people of North Macedonia, surprisingly isn’t rent – but transportation.

It’s something that has to be paid every month if you want to get anywhere.

Rent follows after transportation, but it’s really not as high as in most countries and doesn’t represent a problem for the citizens of North Macedonia.

The least important expense for an average person living in North Macedonia is clothing.

As expected, since the expenses and prices are low – the salaries in North Macedonia are low too.

The minimum wage in this country is 425.1$ which makes it rather difficult to make ends meet.

The average monthly net salary, in turn, is around 425.1$ which is also a small amount, but it does allow citizens to cover most expenses and buy all necessities.

Tourists that visit North Macedonia and plan on staying there for a month, should bring around 500$, and that would definitely suffice.

What About Travel Safety in North Macedonia? 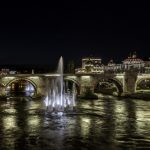 Cost of Living by City in North Macedonia