How Much Does It Cost to Live In Bosnia And Herzegovina?

If you have visited Bosnia and Herzegovina during your lifetime, you might be interested in living there for a period of time.

Or, you might find a very attractive job there and decide to move house.

Whatever the reason for your settling there is, you should get acquainted with all the expenses that await you after arriving there.

In order to get all the answers to your questions, you should focus on those areas where your money will go each month.

Bosnia And Herzegovina : Cost of Living by City

Those who love spending their free time in a restaurant and frequently dine out would be astonished by the low prices of meals in Bosnia and Herzegovina, which start from only $4.

And the quality of food would not be bad, even though the restaurant is inexpensive.

So as to examine how much money you will need for basic groceries, you will need to make sure that your diet is not so expensive.

However, in Bosnia, you will find out that food is quite affordable and that you can afford to buy it in the supermarkets as well as in the local markets.

This rule of using public transportation systems as a less expensive means of commuting goes for all countries.

A similar situation is in Bosnia, due to the high prices of gasoline.

You can travel daily by bus or tram for just $30.

The price of basic utilities varies from season to season as it is cheaper in the summer due to the expensive heating bills in the winter.

Phone calls are rather inexpensive and the monthly bills for the Internet are quite cheaper than in most European countries.

Entertainment is very important and social life varies due to the different desires among people.

Tennis court rent is less expensive than in most of the world and cinema tickets are also very affordable.

Sports people would like the low price of fitness clubs as well.

In comparison to some other European countries, it can be said that clothes are inexpensive in Bosnia and Herzegovina.

The prices are generally lower than in more developed countries but related to the average salary, they are not so affordable.

That is the reason why the least money is spent on that.

How expensive the rent will be is highly dependent on whether you are living alone or with the whole family.

If you are coming as a couple, your rent would not be high.

However, the families would need to give money and it is advisable for them to find accommodation away from the city center.

Cost of Living Averages Table for Bosnia And Herzegovina

How Does the Average Person Spend Their Money in Bosnia And Herzegovina?

It is interesting that a small amount of money is given to apartments in Bosnia and Herzegovina.

That is due to the fact that people possess their own places and do not have to pay the rent.

That saves them a lot of money which can be spent on other expenses.

The greatest expense is definitely food, as almost 37% of the monthly salary goes on food alone.

Sports and clothes are the last areas where money is spent.

An equal amount of money is spent on utilities and restaurants.

According to the data, the minimum cost of living in Bosnia and Herzegovina is approximately $300, and people who rent an apartment cannot afford many other things with such a low salary.

The average monthly salary is $620 which is still quite low, considering the fact that some basic expenses might exceed $600 per month.

Still, people manage to survive, probably because they have their own houses and apartments.

For those who want to purchase their own place, the mortgage interest rates are rather high in Bosnia.

What About Travel Safety in Bosnia And Herzegovina? 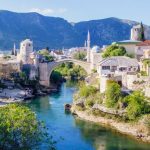 Cost of Living by City in Bosnia And Herzegovina

3 Reviews on Bosnia And Herzegovina