How Much Does It Cost to Live In Banja Luka?

Coming to Bosnia and Herzegovina can be a good choice, but which city to chose depends on your taste and desires.

In terms of prices, Bosnian cities have small differences, which can affect your budget.

The cost of rent or a coffee can be rather different than those you are used to pay, so if you are earning salary in some other more developed country, Banja Luka is ideal for you.

Your budget will be high enough to cover all the expenses, which you will find more than affordable.

Bosnia And Herzegovina : Cost of Living by City

Cost of Living in Bosnia And Herzegovina

In Banja Luka, Bosnia and Herzegovina, you can get a bottle of domestic beer for just $1 which is impossible in numerous European countries.

The restaurant lovers can enjoy a delicious meal in an inexpensive restaurant for less than $4 per person.

That is why more money is spent in restaurants than on sports and clothing.

When it comes to food, Banja Luka is neither an expensive place nor is it a particularly cheap.

You as a foreigner might get the impression that groceries are a bargain, but for the locals, markets are the places where they shop for food so as to be able to save some money.

Public transportation system is a good means of commuting as a month long bus pass will cost you $24.

You can expect to pay a one-way bus ticket $1.

On the other hand, those who drive will have to pay $5 per gallon of gasoline.

The cost of living in Bosnia is relatively low, thus many of the prices are formed according to that.

Utilities will be an important expense, and you will need to pay around $200 per month if you use the Internet.

The amount will highly depend on the number of people living in one apartment.

Banja Luka is a city where entertainment is important and there are numerous cafes where people spend their leisure time.

The citizens are also interested in sports, and the fitness club pass is not too expensive so many young people tend to exercise there.

Tennis court can be rented at the price of less than $10.

Even though the standard is not so high, the people here pay attention to their apparel and it is not far from the truth that they like to wear designers clothes.

There is no standard style among men and women, but they still manage to afford buying at the stores where the prices are not so low.

In comparison to other European countries, and no to speak about Australia, the rent here is so cheap that a person coming from any of these countries would find it a bargain.

However, when we take into consideration that the average salary is not above $500, then giving $200 for the rent is not affordable at all.

How Does the Average Person Spend Their Money in Banja Luka?

It can never be said exactly how much money an average person spends during a month, but the data represents the closest approximation.

One month spending is highlighted, including the cost of restaurants, rent, and transportation, so as to give future settlers a better idea of how to organize his/her wages.

Due to the fact that the majority of Banja Luka’s citizens possess a house or flat, not much money is spent on that.

However, food is of utmost importance and takes 34% of monthly budget.

As in every country, the official average salary does not always represent the real situation and conditions in one state.

The data is usually based on monthly salaries paid at state institutions, so there are people who are earn a much lower amount that the average.

It is estimated that the minimum wage is around $300 which is too low when all the expenses are taken into consideration.

The mortgage interest rate is higher than in some other European countries.

What About Travel Safety in Banja Luka? 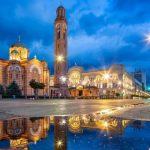 Cost of Living by City in Banja Luka