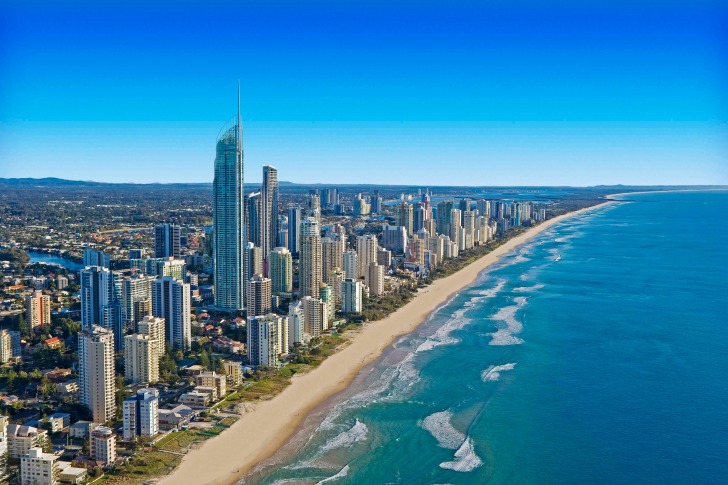 Australia - safety as a country

The Gold Coast is a coastal city in the southeast corner of the state of Queensland in Australia, located between the state capital of Brisbane to the north and the New South Wales state border to the south.

The area is mostly covered in sub-tropical rainforest, but sections have been cleared for dairy farmland and wineries.

The Gold Coast has long been a high-profile tourist destination for Australians and overseas travelers; it’s a famous paradise for surfers.

Over 30 beaches are stretching a total of 35 km.

The Gold Coast region has many theme parks.

And they are swamped during peak season.

In the city you need to be careful with nightlife, to avoid drunken companies and relationships with drugs. Especially attentive to be with wildlife in the city. Australia has a large number of poisonous animals and insects, more than in any other country.

Taxis and public transportation are safe. You can use it at any time of the day or night. However, you should always use common sense. Book only licensed taxis and be sure that drivers turn on a taximeter.

Pickpocketing is a common problem in the region. Tourists and surfer buddies are the main targets. Travelers are advised to keep an eye on their pockets, not to carry valuables with them, and not to leave things unattended, especially on the beaches.

Severe flooding, storms, bush fires, cyclones, and heat waves are major natural incidents that potentially could affect the city. Wildlife and poison animals as well may cause disturb - since the region has a lot of deadly poisonous animals and insects.

Gold coast considered to be one of the most criminal places in Australia with robbery and mugging. Robbers can attack tourists who are too relaxed after an active day. Avoid drunk fights, do not let you in drug-related gangs, and don't show up on the beaches late at night.

Australia did not have significant terrorist attacks, but the country has developed protection measures if any happen. The risk of terrorism in the Gold Coast exists but is not common. Travelers should be very cautioned and avoid demonstrations and protest actions.

А scam is quite common. Perhaps a lot of fraud with fake money and cards. Be careful not to leave your things unattended. reported cases where tourists were approached to offer assistance, and then tried to sell fake "precious" items.

Women traveling alone will feel completely safe at the Gold Coast. However, be careful when moving around the city at night and use common sense during all activities. Also, be cautious in bars if you all alone.

So... How Safe Is Gold Coast Really?

Gold Coast attracts many tourists, and it is a tidbit for scammers and thieves.

The index of crime is moderate, but it’s increasing in the past years.

Swimming and surfing is the main idea here.

So you should take measures to protect yourself and always swim between the flags.

Alcohol-fuelled violence is another issue in Gold Coast.

Violence often erupts late at night and in the early hours of the morning.

Areas to be careful to avoid are Cavill Ave and Orchid Ave in Surfers Paradise, Broadbeach Mall in Broadbeach, and Griffith St in Coolangatta.

Everyone should beware of scammers because there are a lot of them.

They are known to dispense “fake” or older style USD notes.

Once swapped, they will deny ever giving you the unusable notes and accuse you of exchanging the bills yourself.

Best to stay clear of it or and change money in banks.

One of the main problems in the Gold Coast is in violent offenses such as common assault, stabbing, and attempted murder are often related to the need to obtain drugs.

When it comes to Australian wildlife – giant stinging jellyfish, some up to a meter in diameter, wash up on Gold Coast beaches and can be very dangerous.

How Does Gold Coast Compare?