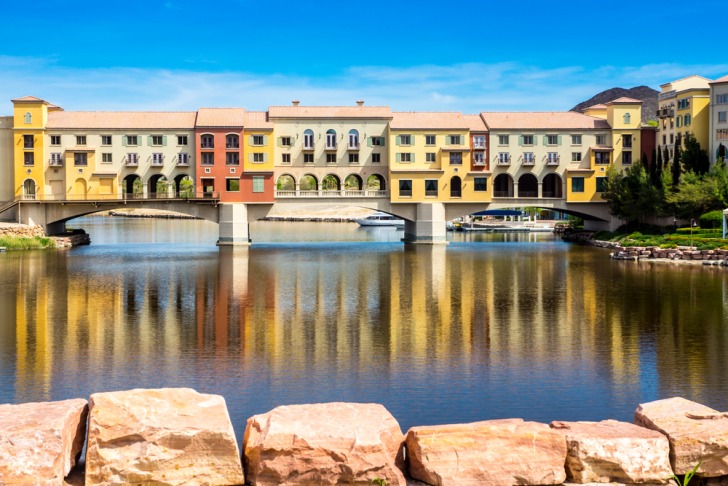 Just outside the neon lights of Las Vegas, lies an equally vibrant and exciting city with a special sauce of its own.

Henderson, Nevada is the second-largest city in the state.

The past few decades have shown growth of epic proportions in this desert hamlet.

Henderson is more of a family community, a little quieter than its noisy neighbor of Las Vegas, but still with the same entertainment, shopping, and gambling excitement.

There are districts throughout this community that can range from lush homes built into the walls of desert mountains to lower-income housing in a seemingly seedy neighborhood on the way to Lake Las Vegas.

You can be in the middle of it all or away from it all in minutes.

There’s also the Ethel M Chocolate Factory, where you’ll learn where the “M” in “M&M’s” came from and you can see candy being produced while walking through their beautiful cactus garden.

This amazing part of the Las Vegas Valley often gets overlooked due to so much being focused on the Las Vegas Strip and Downtown Las Vegas, but it is worth a trip to see a safer and less crowded side of the whole Las Vegas experience.

Even though it made the #2 spot on a recent "Safest Large Cities" list in 2021, we're sticking with a medium overall risk, considering the size of the city, the transient nature of the area, and other risks from weather and terrorism.

There's a medium risk when taking public transportation in Henderson. This is a city where cabs and rideshares are plentiful. Personal safety isn't the top concern when riding a taxi, it's longhauling—a practice of greedy drivers trying to lengthen the ride, thus the fare, of a tourist. The Nevada Taxicab Authority has been cracking down on this practice for years. If you feel you are a victim of longhauling, you can file a report.

Henderson is a tale of several city areas. Given the range of crimes reported, we're giving it a medium risk of being pickpocketed. The "locals" casinos, as they are called, have several locations in Henderson, and attract some criminals looking for a good opportunity. Don't go flashing big gambling winnings around, or show a wad of cash when paying a tip. Overall, there's about a 1 in 78 chance of being a victim of Larceny/Theft, according to 2019 FBI data.

There's a medium risk in Henderson. That might be confusing given there are nearly 300 days of sunshine and only 27 average days with precipitation in this desert oasis. When it does rain, it can get rough real fast. High winds are a hallmark of the spring season, some strong enough to close down roads or knock over umbrellas at the pool. Monsoon storms whip up quickly in the summer, causing rapid thunderstorms and heavy rains that can quickly flood the region briefly. The intense spring, summer, and fall heat is another reason to watch out for the weather here.

There's a medium risk of mugging in Henderson, with nearly 11 violent crimes per 1000 people according to FBI data. While that's a low number compared to other cities of similar size, muggings can easily happen to tourists who have been showboating gambling wins or are tourists, making them an easy mark for would-be criminals. Keep it low-key and you'll be safer than in nearby Las Vegas.

The Las Vegas metropolitan area can be a medium to high risk of terrorism, especially close to big events like the New Year's holiday. The Strip of Las Vegas is a known potential target and Hoover Dam is nearby, which provides water supply to several western states. While you won't lose sleep over this concern, it's important to be vigilant and report anything strange you see happening.

There's a high risk of scams in Las Vegas. From scalpers selling tickets to shows that have closed, to homeless people begging for money, to impromptu performances outside casinos that are nothing more than a scammer dressed up in a Halloween costume, there are many ways scammers try to get all they can from tourists. Don't buy anything that doesn't come from an official vendor, and if a deal seems too good to be true, it is. All resorts and hotels have concierge services to get you everything you need in this tourist town.

There's a medium risk for women traveling to Henderson. This area brings bridal parties, girlfriend getaways, and spa weekends for ladies looking to getaway. Las Vegas is also a top city for the growing sex trafficking trade, and young women can be approached anywhere. Due to the transient nature of the city, it's easy to get lost and never found. Staying in groups, avoiding a random person approaching you with some kind of crazy offer, and letting your friends and family know about travel plans for the day all help keep you safe.

Tap water risk is low in Henderson. The water comes from the Colorado River, filled with snow runoff from the Rockies. From there, it is treated in one of three Henderson water treatment plants and measured daily to make sure it's safe and consumable.

Safest Places to Visit in Henderson

The Las Vegas area has “locals casinos”, which are generally areas that have hotels, casinos, shopping, dining, and entertainment all in one area.

The District at Green Valley Ranch is the shining star of the “local” places in Henderson.

You might hear people refer to this area as Green Valley, which is true, but it’s still technically in Henderson.

Green Valley is just a fancier name for this part of town.

There’s the Water Street District in downtown Henderson, on the other side of U.S. 95 (known locally as “The 95”).

It’s an older stretch of town, with smaller casinos, and more of an old-school vibe.

You’ll get boutique shopping, locally owned and operated eateries, and some of the best personalities in Henderson.

This is a laid-back area with a lot of history, but it’s far from the neon lights of the Las Vegas Strip.

You might see more homeless people or “sketchy” people here than in other parts of Henderson, but that’s also part of the character of this no-frills community.

It’s a high-end housing hideaway from the hectic pace of Las Vegas but offers tourists hotels, dining, spas, and a man-made lake to enjoy water activities.

Consider this a getaway from your getaway.

Celine Dion lives in this slice of southern Nevada.

See if a local can point you in the right direction to drive by.

Places to Avoid in Henderson

Given that it’s one of the safest large cities in America, there isn’t one area to avoid.

Crime mapping shows the north end of Henderson has the highest crime rates, but that’s not near a tourist area anyway.

If you do need to drive through the northern area of Henderson, make sure you have a good GPS and stay on the 95 to get downtown.

There are more highway patrols and less of a chance you’ll wander into a crime-ridden part of town.

Down by Water Street, there are surrounding neighborhoods of older homes.

You can see the growth of Las Vegas just by looking at the age of the neighborhood.

Some locals refer to the neighborhoods around the Water Street District as “Hendertucky”, just due to it being a little more rural and not nearly as pristine as other Henderson neighborhoods.

You should always be cautious when parking and walking down streets to avoid being a crime of opportunity.

Even in this more laid-back side of the Valley, it’s still a fast-moving metro area with well-trained criminals.

Safety Tips for Traveling to Henderson

So... How Safe Is Henderson Really?

Overall, it’s a very safe city and was ranked the second-largest safe city by Advisor Smith based on FBI data.

This is a community of neighborhoods with a slice of tourism mixed in.

There is a gang presence in the north part of Henderson, bleeding into the more prominent Las Vegas community, but again, that’s not a place tourists are going to flock to anyway.

Anything along the I-95 corridor is easy to access for both criminals and tourists.

You are safest sticking to the Green Valley Ranch area and Lake Las Vegas.

The Water Street District is best visited during daylight hours, as the neighborhoods can get a little seedy just outside the main road.

In some areas, you’ll see men handing out cards encouraging a trip to a strip club.

They are only looking for clients, so if you ignore them, they won’t bother you.

How Does Henderson Compare?