How Much Does It Cost to Live In Slovenia?

Slovenia is a member of the European Union and a country known for some of the most gorgeous tourist spots in the Balkans.

Despite its small size, the importance of this Alpine country lies in the fact that it controls some of Europe’s major transit routes.

For those interested in moving here, the situation may be tricky: namely, right now, the real estate market in Slovenia is booming and inventory is low.

So if you’re looking for a family home, you’ll probably pay for it a lot more.

Slovenia : Cost of Living by City

Eating out in this country can be expensive and commonly not appropriate for vegans, so the best way to get cheap foods to your liking is to actually buy and cook it directly from the local supermarkets. There are, however, international McDonalds fast-food restaurants in all larger cities. Hamburgers are also served in grills on every corner.

You can buy relatively cheap groceries and other common supplies in several supermarkets, like the famous Slovene supermarket chain of stores by the name of Mercator. Fresh veggies and fruit are always available at relatively low prices at Slovenia’s many open markets that pop up in most of its cities.

Tourists and expats may experience tougher times when traveling anywhere off the highways, or when using public transport. Bus schedules have been slashed which means you’ll have to wait not knowing when the bus will come – so some planning ahead is required. It’s not cheap either – a monthly pass will cost you over 40$.

Utilities are rather expensive in Slovenia, though since the country has relatively high standards, those that live here can afford it without many problems. All the basic ones, including water, cooling, heating and garbage services amount up to over 200$ a month. Internet isn’t cheap either, costing around 36$ a month.

Sports and fitness are not as pricey in Slovenia as you would expect looking at all the other prices! A membership at a fitness club for one adult costs around 44$ a month. As for leisure, there are many opportunities to have fun in Slovenia – it’s a very modern country with all forms of entertainment. Cinema tickets will cost you around 6$ per person.

Brand-name clothes usually have the same prices as in the rest of Europe which are generally higher than in the US, and Slovenia has even higher prices for clothes than in the rest of the Balkans. For example, Levi’s jeans cost nearly 80$ while quality running sneakers of brands like Nike cost about a 85$. Light pieces of clothing in chain stores like Zara cost around 33$.

Rent in Slovenia is relatively expensive. For an apartment in any of the cities’ center, you’ll have to cash out around 500$. If you decide to live in another part of the country, or on the outskirts of any of the major cities/in the suburbs, you could lower your rent to around 380$.

How Does the Average Person Spend Their Money in Slovenia?

In Slovenia the biggest chunk of the paycheck gets spent on food and a large portion of people’s salaries gets spend in markets or grocery stores.

The next huge expense is the rent which is rather expensive in this country.

Restaurants take up the next spot on the list, since food can get pretty pricey, and, as in most countries, those who are well-off eat in restaurants practically every day.

Those that get a minimum wage of about 950$ might have some hard time covering all expenses, especially if they’re renting an apartment.

Still, the minimum wage in this country is far better and higher than in most other Balkan countries.

Average monthly net salary is pretty high, and though their expenses are high too, an average citizen of Slovenia can live comfortably and have no problem earning for a living.

Of course, those renting an apartment will always have a harder time paying off their bills and rent, but generally speaking, Slovenia has just recently reached a high living standard.

What About Travel Safety in Slovenia? 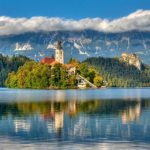 Cost of Living by City in Slovenia