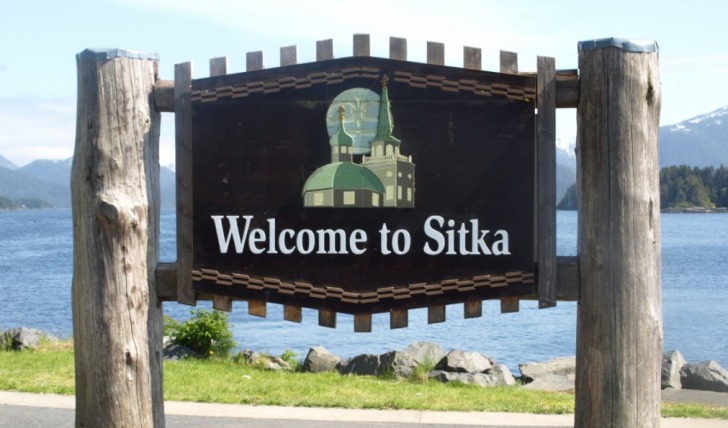 If you’ve got your sights set on Sitka, Alaska, you are in for an exciting and historic adventure.

The city sits among the 1,100 islands of the Alexander Archipelago and is just a massive mountain range with a great percentage of it underwater.

Sitka is a staple of many cruise ship ports and getting here by air will still require a ferry ride.

While many towns are built around tourist access, Sitka is more protective of its history than worried about easy access to its attractions.

Getting off the cruise ship will still require a 5-mile ride into town and, if you happen to fly, the airport is on a different island.

This city was once a Russian town, so there’s going to be a Russian influence in a lot of the attractions in town.

The Russian Bishop’s House is a historical landmark open for tours and the story of the Bishop’s influence is quite incredible.

Totem poles decorate the area and can be seen en masse at Sitka National Historic Park (but people called it Totem Park).

Totems are not just decorations, they are storytellers of generations gone by.

They honor the dead and celebrate the species in the Alaskan habitat.

On the horizon, you’ll see Mt. Edgecumbe and there’s a trail to the top.

You can also hike Mt. Verstovia with an entrance in the center of town.

Whether you are here for a day or a week, there’s just a lot to do in this small town of 8,500 people with a large wilderness area surrounding three sides.

There's a low overall risk in Sitka. You'll probably read how high crime is in Alaska, but Sitka breaks any stereotype that might exist. Crime rates are very low and there's a lot to do. The biggest risk is preparing for the elements, but we're going to walk you through how to do that.

There's a low risk and a lot of options. You can water taxi, land taxi, rent a car, or bicycle. The public transportation system is called "The RIDE" and does have a stop at the cruise terminal.

There were no pickpockets or purse snatching in 2020. That was a pandemic year, however, and cruise ships were halted. So I dug into the data from previous years. Going back through 2017, there was just one pickpocket reported in all that time. There's a low risk here. Those low numbers are probably helped by people using good safety practices, so follow their lead.

This is the one medium-risk area. The city lists the following things as disaster risks: earthquake, tsunami, dam failure, power/communications failure, and water contamination. There is great information on the emergency preparedness city website so you can know what to do and where to go if a disaster happens while you're there. It's unlikely, but you still should be prepared.

There were just two robberies in 2020. One was a bank and one was a robbery in public. There's a low risk, but again, good safety preparedness probably helps keep the numbers low.

There's a low risk here. Nothing of note around Sitka is a hard target.

There's a low risk of being scammed. Even in rural Alaska, the same old spoofing phone numbers scams impact locals, but nothing of note for tourists. That said, you should always be confident your tour guide or operator is licensed and insured. There's going to be a markup on a lot of prices because it's rural Alaska and a tourist town, but if something feels too pricey for what you're getting, walk away.

When I research these articles for you, I do a lot of digging into all kinds of resources. One of them is watching travel guides from people on YouTube. Interestingly, many of the Sitka videos were single women doing everything from wandering Totem Park to going for a six-hour hike up a mountain. You should be safe here with low risk.

The city water has no violations according to the most recent quality report. For those who are particular about tap water, I do want to let you know this water isn't filtered from the Blue Lake source, due to the clean water quality there. The tap water is only disinfected before it reaches the pipes. While the supply is safe, things like flushing anything but waste and toilet paper down the toilet, or contamination in the recreation areas can throw the quality off balance. There's a low risk but proceed with caution knowing that information.

Safest Places to Visit in Sitka

You’re going to have to be comfortable on boats and small airplanes if you want to do some of the excursions in Sitka.

There’s a word you’ll need to learn (if you don’t already) in Sitka.

The most basic and least scientific way to explain it is — these are waterways surrounded by steep cliffs that are deep.

When you arrive in town, you’ll have shopping and dining options.

I highly recommend saving room for a King Crab (and be VERY hungry because those things are huge!) Nearby is the Russian Bishops House, one of the largest reminders that this was once Russian territory and it thrived under their leadership.

125 years before Alaska became a state, it was Russian territory.

There are two floors to tour here.

Just past there, you’ll end up at the National Historic Park, where you can walk the Totem Trail and learn about the 18 figures that stand in the rainforest.

(Did I mention that all of Sitka is in a rainforest?)

You can fish in the park if you have a license.

The Mount Verstovia trail is just south of the park.

It’s a one-way trail best for only experienced hikers who can handle the rugged and slick walk up 2500 feet.

For an easier hike, try the Indian River Trail and you’ll get to see spawning salmon during certain times of the year.

If you want to hike Mount Edgecombe, you’ll have to take a 30-minute boat ride.

The hike is strenuous and steep at times.

It’s also a volcano, but don’t worry, it hasn’t erupted in 3200 years and is now dormant.

Animal lovers have a few options in Sitka:

The one thing that isn’t offered here that many Alaska cities have is gold panning tours.

Places to Avoid in Sitka

The real danger in Sitka is more the environment than the people.

Crime rates are very low and crime maps show what little crime there is spread throughout the community.

It’s also not a big enough city to have different neighborhoods on crime maps.

I’m not a fan of flying and small planes make me nervous, so I research a lot before I have to fly.

It’s good for nervous people like me to know Sitka is ranked as one of the most dangerous airports in the country.

It’s a small airport with one runway.

Snow, debris, and ever-changing winds and blowing snow can make the landings nailbiting or get them canceled altogether.

Coming to Alaska, you probably know to be prepared for colder weather, but you should avoid leaving rain gear behind.

It rains a lot in Sitka.

For 235 days of the year, you can expect rain or snow.

Load up on GOR-TEK gear to get the best experience in Sitka.

Avoid buying new hiking boots that you don’t wear until you arrive in Sitka.

Break them in for a few weeks before taking on the slippery, muddy trails that provide spectacular views.

If you’re Googling “Sitka” you are going to get directed to sites for SITKA Gear, which is a retail business and not connected to the city of Sitka.

That’s just a heads up.

Safety Tips for Traveling to Sitka

So... How Safe Is Sitka Really?

Let’s just take a look at the crime numbers from 2019 (I’m using those since 2020 was canceled by the pandemic and that affects the number of people in town and crime).

In a lot of my Alaska research, people keep saying the same things like “You don’t realize how assaulting the rain is until you get there” or “I thought I was a strong hiker but that mountain was incredibly hard to climb.”

If you’ve never summited a mountain before, you aren’t going to magically be strong enough to do it just because you’re on a once-in-a-lifetime trip.

There are so many travel forums dedicated to Alaska with people who just wrapped up their first trip, to locals, to experienced cruisers.

Ask lots of questions in these forums as people are more than willing to help.

There aren’t a lot of those internet trolls in travel forums, which is a welcome relief.

However, don’t meet up with locals you meet online unless you are doing so in a public place.

How Does Sitka Compare?