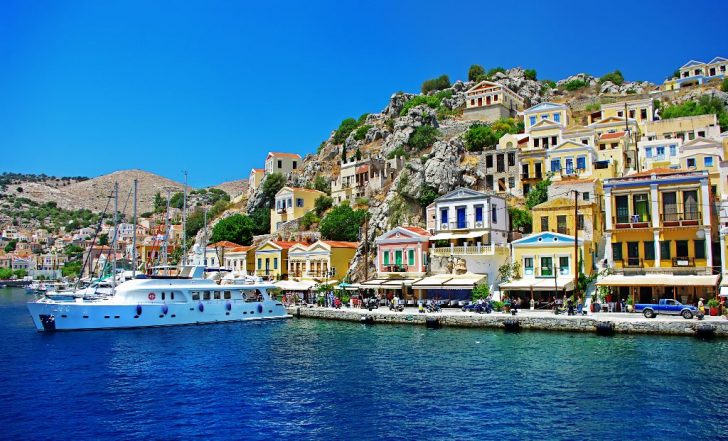 Greece - safety as a country

Rhodes Island is considered one of the most beautiful islands in Greece and its capital city is Rhodes.

When it comes to Rhodes, the old part is the main attraction of the city, since it has been one of the UNESCO World Heritage sights.

For tourists seeking relaxation by the sea, Rhodes has to offer white sandy beaches and great food in the restaurants that are next to the shore.

Whether your interests are ancient sites, Rhodes offers plenty of authentic Greece historical buildings and landmarks.

Rhodes is one of the most visited Greek Islands because of the combination of beaches, archaeological sites, and medieval towns.

The island of Rhodes in Greece can be taken as a safe destination, besides being disturbed by some young, drunk partiers who might commit crimes against other tourists or locals. Taxi drivers will try to take advantage by turning off their meters. Pedestrian areas are frequent places where pickpockets operate, as well as the beach.

One of the road dangers in Rhodes is mopeds which are popular with tourists and the locals as well. Put on the helmet in case you are driving and do not wear headphones while walking around town the city. Taxis drivers may charge you more than the real price and the buses are often very full.

The risk of being pickpocketed is medium, meaning that the old streets of Rhodes which are attracted by tourists are at the same time attracted by a large number of thieves, especially in summer.

Earthquakes can be experienced in Rhodes, but they are very rare. Sometimes forest fires can occur during the summer months due to the extremely hot weather. They can be dangerous and unpredictable.

Because Rhodes is a safe city, a traveler might think that mugging and kidnapping do not exist. However, there are dangerous zones were attacks on people who look like foreigners were reported. There have been serious crimes against tourists in busy areas and tourist destinations.

Terrorist attacks in Greece might happen, and cannot be predicted. There have been reports of several attacks in places visited by foreigners. Because there is a heightened threat of terrorist attack globally, Greece is the country which might not be excluded.

Scam risk is so low, that it can be said that it almost does not exist in Rhodes. However, never walk the streets without being aware of your surroundings and pay attention to your belongings at the beach, due to a large number of immigrants coming to Greece.

Rhodes is a perfect destination for solo female travelers. Greek men are charming and friendly. They usually only admire women and do not bother ones that are not interested. However, you might get some attention you do not want, but the usual offenders are foreigners and not Greeks.

So... How Safe Is Rhodes Really?

Rhodes is often considered one of the safest places in Greece.

The low crime rate makes it safe to walk around at almost any time of the day or night.

Nevertheless, the biggest dangers on Rhodes can be drunk people at night who often give rise to fights as well as alcohol-rated injuries and car accidents.

It is a touristic center which leads to pickpocketing.

Thieves tend to take advantage of distracted tourists in crowds.

Even though women can feel safe in Rhodes, they should always practice common sense and avoid dangerous areas at night.

To find out what the risky areas are you should consult with the travel guide or local authorities.

You need to be calm in case of any emergency, whether it is an earthquake, forest fire or some medical issues.

Rhodes is the paradise on Earth, and if you have a chance to visit it, do not hesitate.

How Does Rhodes Compare?