How Much Does It Cost to Live In Serbia?

Serbia is a country located in the Balkans, in southeast Europe.

Its importance lies in the fact that it was a founder and one of the six republics of the former Socialist Federal Republic of Yugoslavia, a huge world power.

Tourists absolutely love spending time in Serbia and much of it state budget comes from tourism.

The country is slowly becoming a popular tourist destination with its warm and homey people and the most vibrant nightlife in Europe.

The cost of living here is significantly lower than in most popular European countries.

Serbia : Cost of Living by City

Serbia is actually world-famous for its delicious kitchen. Though it’s decidedly a non-veg country, it boasts a lot of cheap establishments, and grocery shops, restaurants, cafes etc. where you can try their gorgeous foods. There are international fast-food franchises such as McDonald’s, KFC, and Pizza Hut on every corner where you can eat for 5$. Generally, prices are cheap compared to Western Europe with main dishes ranging from 7–25$ per person.

Markets sell ingredients in Serbia, with far fewer finished products. In Serbia, it’s normal to get the ingredients to cook your own meals. Outside of urban areas you can find large supermarkets with bigger quantity products and lower prices, like DIS, Metro, Velpro, Lidl or Tempo. For fresh products such as fruits, vegetables, meat and dairy, the best ones can be found in small markets called pijaca, that can be found virtually everywhere.

Transportation is mostly badly organized and not reliable at all. There are alleged time tables but no vehicle respects it, least of all trains. Buses are often late, and you can wait trams for 20 minutes or so. On top of all this, it’s not that cheap either. A one-way ticket costs 0.85$, while a monthly pass is almost 30$. It’s a rather high price for a low service.

Utilities aren’t cheap either. While it definitely depends on the size of your house/apartment and the amount of electricity you spend, your bills, on average, if you live in a home that’s 85m2 big, will amount to over 140$. Internet is usually of very high speed even for European standards, and it is relatively inexpensive compared to the overall utilities.

Serbia has a splendid nature and it offers truly amazing places to practice sports outdoors. You can hike, jog and swim in most cities and little towns in Serbia, but if you prefer practicing sports in a gym or a fitness club, a membership in one will be relatively cheap – around 22$. Entertainment facilities are also aplenty, so if you want to go to the cinema, for instance, a ticket will cost you around 3$.

Prices when it comes to shopping, tend to be on par with the rest of the Balkans, but import taxes make clothes and shoes in Serbia slightly more expensive. Cheaper goods can be found in outlets, the most popular and the biggest one being the Fashion Park outlet in Inđija. Usually, in the most popular Belgrade shopping malls you can find quality jeans for around 60$ and running sneakers for around 77$.

Rent is relatively inexpensive, but it does depend on the particular area and the city you want to live in. If you want to live in any of the major cities, and in the centers above all, be prepared to pay over 250$. If, however, you’re okay with living on the outskirts of town, the rent price will drop to under 200$.

How Does the Average Person Spend Their Money in Serbia?

Most people in Serbia have a problem with groceries costing too much – food will probably be your biggest expense in this country.

There are many statistics that say that on average, the expenses that are needed for food are far bigger than one’s basket of consumer goods.

The least of all expenses is, no surprise, shopping for clothing and shoes.

People in Serbia are generally not satisfied with their salaries, and the dissatisfaction is almost palpable among the people.

The average monthly net salary is around 400$, but there is a high percentage of people that aren’t registered workers, and they work for private companies where they are staggeringly underpaid.

Although the minimum wage is 318$ – that only applies for the state jobs, and the fact still remains that many, many people work for much less.

With a minimum wage of 300$, people can only buy basic things in Serbia without the option of saving up or spending on pleasure or travel.

What About Travel Safety in Serbia? 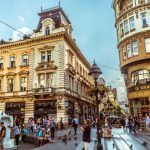 Cost of Living by City in Serbia