How Much Does It Cost to Live In Lithuania?

In general, Lithuania is a good place to live and this has been stated repeatedly by both the natives and tourists.

All of the basic services you need in a strange city are available to anyone and are of reasonably good quality, on par with what you will find anywhere in Europe.

And though it can be expensive, you can live quite cheaply in here if you really need or want to.

Prices and wages alike have been going up at about 6% annually since Lithuania has joined EU, so hurry up, as it’s only going to get more expensive!

Lithuania : Cost of Living by City

Restaurants are relatively expensive in Lithuania, though you can find some delicious food for a very low price. Generally, inexpensive restaurants cost around 8$ per person, but there’s always street food. If you want to save some money, there are always ways in which you can do so, this country is rich with all kinds of restaurants and types of food.

Prices are slowly rising in Lithuania, but there is wide availability – from fresh fruits and veggies to varieties of local ingredients which will make your meals delicious. People can eat reasonably well here, even if they don’t have enough money to buy ingredients and cook, state aid is available for those who cannot afford food.

Utilities are reasonable in Lithuania, too. They cost around 160$ for all basic ones (like gas, electricity, waste services, heating, cooling, etc) and all this in an apartment that is larger than medium – we’re talking around 85m2. Internet is very fast in Lithuania and unbelievably cheap, costing only 12$ a month.

Enjoying sports and staying fit, is a pleasure that isn’t as expensive in Lithuania as it would be in many, many other countries around the world. Instead, a membership in a gym or a fitness club costs only around 35$ a month. Cinema tickets aren’t expensive either – at least not by European standards: they cost 7$ each.

Shopping for clothing and shoes costs as much as it would in the rest of Europe – and in more prosperous European cities as well. Jeans of good quality like Levi’s cost more than 70$ which is considered pricey, while quality running sneakers cost well above 80$. Even the lighter pieces of clothing like shirts cost more than 40$.

Rental prices are growing very quickly in Lithuania, and especially in its major cities. However, it’s still possible to find a decent place to live at a price you can afford for most people. You can find, for example, an apartment in the center of one of Lithuania’s major cities for around 500$.

How Does the Average Person Spend Their Money in Lithuania?

The average person in Lithuania spends their money like most people around the world – on food!

Then, the next expense for a hypothetical person living in Lithuania, would definitely be rent, though rent is still reasonably high, while it probably won’t be in a couple of years.

Restaurants can get pretty pricey in Lithuania which is why they take up 15% of all expenses of an average person in Lithuania, along with transportation which isn’t as expensive, but it’s definitely an everyday necessity.

Utilities are right behind transportation – another expense that just has to be paid.

The problem with Lithuania is that the prices are coming up to average euro-zone levels, yet the salary growth is slow, which makes it impossible for an average consumer to buy all necessities.

However, other statistics state that prices and wages alike have been going up at about 6% annually since Lithuania has joined EU.

Whatever the case, the matter of fact is that the average monthly net salary is around 800$, which means that an average citizen of Lithuania has to set aside about a half of their salary in order to just pay rent.

What About Travel Safety in Lithuania? 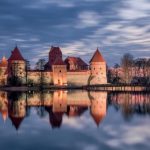 Cost of Living by City in Lithuania