How Much Does It Cost to Live In Quebec City?

You should be aware that you cannot expect that your life in Quebec City will be the same as your life in your country of origin once you come to Canada.

You need to accept the fact that your financial situation and your standard of living should match, so as to be able to manage the much higher cost of living in Quebec.

Finding out about the average wages, the cost of renting the apartment and other daily household expenses is important before relocating to Quebec.

The amount of money you might spend in a restaurant will depend on what kind of restaurant you have decided to go to.

The price of meals can range from $12 in the inexpensive ones to more than $50 per person in those more luxurious.

Even though people from Quebec City roughly make the lower amount of money per month, the food prices are the same as in other areas the country where the salary is much higher.

That is why more than 40% of monthly budget is spent on it.

Transportation is an important thing to consider when thinking about how much it will cost to live somewhere, and how you would commute daily to work.

You can choose driving, as the majority of citizens, or pick the public transport as a better solution, at least for the first couple of months.

Utilities costs are usually paid in addition to the rental cost of an apartment and in comparison to some other Canadian cities, the basic services are affordable, not exceeding $100.

The Internet access is still quite pricey, but again less expensive than in other major cities.

What sports people might be surprised about is that the prices of one hour tennis practice are almost equally expensive as the monthly fitness pass.

You can enjoy the latest movies in the cinemas at the price of less than $10 per ticket.

What amount you will spend on clothing items depends on your lifestyle and financial odds, and the spendings will highly differ between those who buy designer clothes and those who do not pay too much attention on brands.

In general, Quebec City is not too expensive when it comes to apparel.

As the housing costs are the most pricey factors that can affect your budget, in Quebec city, they are more than affordable, and the prices are even lower the more you move away from the city center.

How Does the Average Person Spend Their Money in Quebec City?

Quebec is one of the very few cities in Canada where less than 20% of the monthly salary is spent on rent, as the average rent for a small apartment in the city center is not expensive at all.

Out of the center, it is even more affordable.

However, the most money is given for groceries, which are quite pricey here.

Restaurants and transportation come on the third place, while the apparel takes the least money.

The cost of living in Canada varies widely from place to place, as well as the average monthly salary.

Quebec City boasts low rent costs, but it should be noted that the salaries are lower, too.

Before making the move to a city which looks like it could be the ideal place for your future life, make sure to check that you can afford it by comparing your monthly earnings with the amount of money that have to be spent on the necessary costs.

What About Travel Safety in Quebec City? 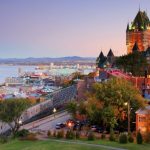 Cost of Living by City in Quebec City