How Much Does It Cost to Live In Ottawa?

When it comes to relocating, how do you choose which place is the best for you to go?

For some people who want to settle in Canada, Ottawa is the dream city which has to offer everything they need, plus provide better living and working conditions.

It is suggested is that the cost of living in Ottawa should be a major aspect for consideration for them as various living expenses can be rather higher than in the country they are coming from.

To able to eat out at a restaurant or a bar on a daily basis, you would need to have a pretty high monthly budget.

Alcohol in Ottawa is more expensive than in other Canadian cites, so you will need to pay more than $5 for a bottle of beer.

The cost of living in Ottawa in terms of food and groceries is expensive, but you can generally save up on food by cooking your meals at home and purchasing foodstuff at the local markets instead of visiting the local cafes and restaurants daily.

Transportation costs are generally expensive when it comes to driving your own car, which is the most frequent way of commuting in Ottawa.

On the other hand, public transportation is efficient and punctual, fast and reliable, so paying $88 for a monthly pass is not too pricey.

Utilities need to be paid on a monthly basis, and they might take much of your budget, depending on the number of family members living in one apartment and the season, as well.

You will need to provide more than $200 per month for the basic utilities including the Internet access which is quite pricey in Ottawa.

When compared to other cities, Ottawa’s fitness centers are rather expensive, exceeding $40 per month.

One hour of tennis practice costs $18, while those who like movies will need to pay more than $10 for the latest release.

Still, entertainment is an integral part of life and young people spend much money on it.

When all the cities are taken into consideration, it can be said that clothing is considerably affordable in Canada.

Ottawa citizens spend a very little amount of money on clothing generally, but those who like shopping for clothes will be satisfied with the prices here.

As in the majority of countries, the rent costs are the most important aspect of the cost of living, and the larger the city, the highest are the rents.

Ottawa can boast the average rent costs which can be considered affordable in relation to some other major cities here.

How Does the Average Person Spend Their Money in Ottawa?

Ottawa is the city where people do not spend much on apparel, even though the prices are not high.

Outdoor activities that can be done are numerous, so little money is given for fitness clubs, as well.

Utilities are not so expensive, so they require less money than the transportation.

The most of monthly budget goes for the housing expenses, if a person has to rent the apartment, and the food which is quite expensive here.

It is interesting to notice that restaurants are frequently visited, even though they are not inexpensive.

The most expensive cities are the larger cities in Canada and Ottawa is one of them.

The average monthly salary is pretty high here and due to the fact that the majority of citizens possess their places of living, it is estimated that they have more than enough money to cover all the expenses, plus to put some amount aside.

However, if you belong to those who have to rent the apartment, earning the minimum salary would definitely not suffice.

Buying your house would be an ideal solution, as the mortgage rates are not so high.

What About Travel Safety in Ottawa? 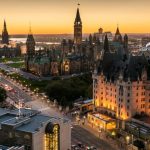 Cost of Living by City in Ottawa