How Much Does It Cost to Live In Calgary?

What is it like living in Calgary is the question frequently asked by foreigner who think about coming and settling in this city.

Speaking about the cost of living in Calgary, it is good to know that this booming city has lower expenses as the prices are quite reasonable compared with most Canadian cities.

As the spending habits differ from person to person, it is advisable to do a research of the city’s major costs before moving there.

Calgary has a huge variety of cafes and restaurants which have impressive offers for every person’s taste.

Alcohol is extremely expensive, prices are higher than in the majority of Canadian cities, while meals can be found at the price of $13 per person in the least expensive restaurants.

Food prices are quite reasonable in Calgary compared with most Canadian cities.

Still, it cannot be said that groceries are inexpensive.

Savvy people would go to the local markets, purchase foodstuff there and prepare meals at home, rather than eating out or buying it at expensive stores, so as to save some money.

Calgary is not an enormous city, so commuting there is not a huge problem.

However, it is always advisable to look for an apartment closer to your work, so as to avoid inconveniences with traffic jams.

Public transportation system is efficient, but not cheap at all.

Calgary is the city where utilities are quite expensive and especially the price of the Internet access.

While the rent is lower than in some other Canadian cities, the services cannot be said to be affordable, as you will need more than $200 per month for that.

Calgary is the city where you can have numerous activities outdoors which thus affects the price of fitness clubs.

Leisure activities that you can participate in are numerous in Calgary, so you can avoid paying more than $45 for a monthly fitness pass or $15 for an hour of tennis practice.

When it comes to clothes, prices are very competitive in Canada, and they depend on the quality and brand.

Calgary is among those cities where clothing items are neither too expensive nor cheap.

Even though the standard of living is high, only 2% of monthly salary is spent on apparel.

The majority of citizens in Calgary own their home, so they do not have to spend much money on housing.

However, foreigners who come there tend to rent their places of living during the whole staying.

The difference in price between the apartments in the city center and out of it is around $200.

How Does the Average Person Spend Their Money in Calgary?

For people who have already decided to relocate to Calgary, it is advisable to get acquainted with the average monthly spending of its citizens so as to be able to create their own plan of earnings and spending.

Most people prefer not to relocate before knowing all the information of importance.

Get ready to spend two thirds of your salary on food and housing, without the utilities included.

The third third would go for all the other activities, such as sport, entertainment and restaurants.

If you are looking for all of the information that is important for living and working in Calgary, it would be a pleasure to find out how high the average salaries here are.

They exceed $3000, which is a huge amount of money compared to the nations where people earn only $80 per month.

However, if you have to rent an apartment there, half of the salary would go for it.

People with the minimum wages would not be able to afford many of non-obligatory items, like clothes, sports and entertainment.

What About Travel Safety in Calgary? 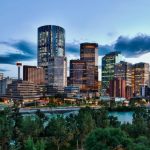 Cost of Living by City in Calgary