With warm ocean temperatures all year round, this South Asian archipelagic country is a popular vacation destination for beachgoers from all over the world.

Plus, the Maldivian people are known for their warmth and hospitality.

The local culture has a myriad of outside influences, from Indian to Sri Lankan to even African cultures.

But one common concern that potential visitors have is whether sharks pose a danger to swimmers in the north-central Indian Ocean.

This is a valid concern, and, whether you are a digital nomad or a short-term casual vacationer, we have everything you need to know to make your stay in this sunny paradise a fun, safe, and unforgettable one.

So… Are There Sharks in the Maldives?

There are 30 known species of sharks in the Maldives.

The 5 most common species in this region are the blacktip, whale, grey reef, scalloped hammerhead, and leopard sharks.

Contrary to popular belief, shark attacks against humans are infrequent.

The reason people are often concerned about shark attacks is the way these marine animals have been depicted in the media over the years, e.g., Jaws and other shark-related films.

Fortunately, unprovoked shark attacks are quite rare, and humans are more likely to kill sharks (from hunting and other human activities) than the other way around.

Shark Species in the Maldives

Is it Safe to Swim in the Maldives?

In fact, there have been zero reported shark attacks on humans in the Maldives, so you can rest assured that its beaches are safe when it comes to sharks.

Stingrays, however, which have a deadly weapon (i.e., the tail) can be potentially dangerous to humans.

Commonly found in the Maldives, especially around the lagoons, stingrays usually only sting humans when they are afraid or feel threatened.

But when they do sting, they often target the body’s critical parts, such as the neck or chest.

That said, stingrays can be fun and interesting creatures to snorkel with; you just need to respect these marine animals and maintain a distance of about 8 feet or more.

Also, like many other popular beaches around the world, the Maldives “can have strong tidal currents,” according to the British Foreign Office (FCO).

Each year, visitors from around the world drown in the Indian Ocean’s waters, mostly due to careless swimming.

To ensure your safety, it is wise to wear fins, especially if you are swimming in a deeper area.

If you get caught in a current, the fins will make it easier to swim back to safety.

It is also important that you swim in groups, rather than by yourself.

That way, if you find yourself in a dangerous situation, it will be easier to call for help.

Interesting Shark Facts in the Maldives

Most sharks in Maldivian waters are not dangerous.

In fact, there have been no reported shark attacks on humans in the Maldives — ever.

Most of the sharks that can be found in the Maldives are mostly non-aggressive species.

Shark attacks only happen when sharks fear for their safety, so as long as you respect these creatures and maintain a reasonable distance, you should be okay.

You can go shark watching in the Maldives.

Besides spotting sharks on your snorkeling or diving trips, you can watch them from a dock or boat.

To increase your chances of spotting sharks, they might be fed fish in certain areas.

Sharks can be found in the Maldives all year round.

However, they are more likely to be found during the dry season, which runs from January to March.

Also, certain shark species tend to congregate in the waters around specific areas of the Maldives, such as the South Ari Atoll islands and the Addu Atoll.

Salt in their bodies is necessary for their survival.

Without it, their cells would cease to function, which would result in the sharks boating and, ultimately, dying.

Due to their strong salt dependence, sharks almost exclusively live in saltwater.

The Indian Ocean, which is a saltwater ocean, is home to 30 shark species.

However, swimmers need not be concerned.

Shark attacks, after all, are extremely rare, and there have been absolutely no reported shark attacks on humans in the Maldives.

The fact of the matter is, sharks are much more susceptible to overfishing and population decline than humans are to shark attacks.

Planning a Trip to The Maldives? 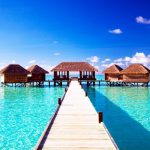 The Maldives is famous worldwide for its dazzling beaches, richness in marine biodiversity, unmatched luxury and pampering, and comfortable overwater bungalows.

However, some people have expressed concern about swimming safety, especially when it comes to swimming in shark-infested waters.

There are indeed 30 species of sharks inhabiting Maldivian waters, but they are mostly non-aggressive and pose little to no danger to humans.

As a matter of fact, no shark attacks on humans have ever been reported in the Maldives.

It is much more likely that sharks will be killed by humans (due to fishing and habitat destruction caused by human activity) than the other way around.

Some common shark species in the Maldives include the blacktip, whale, grey reef, scalloped hammerhead, and leopard sharks.

Not only are these animals harmless to humans, but some of them, such as the whale shark and leopard shark, are curious and like to innocently approach human divers.

The Maldivian waters are extraordinarily safe for swimming, and swimmers need not worry about being attacked by sharks.

They should, however, be careful around stingrays.

With their lethal tails, they tend to strike humans in the neck or chest when threatened.

That is why it is important to maintain a respectful distance with these creatures when diving or snorkeling.

Another common concern is tidal currents, which, according to the British Foreign Office, kill a number of foreign tourists every year.

Ways to be safe from currents include wearing fins and swimming in groups.

And to avoid getting attacked by sharks, it is essential to avoid swimming with open wounds or wearing shiny jewelry.

You should also watch the behavior of fish and turtles.

All in all, the Maldives, where you might be welcomed by friendly or harmless sharks, is an incredibly fun and safe place to enjoy your next beach vacation.

Where in the Maldives are sharks most often found?

Some shark species prefer swimming around the South Ari Atoll islands and the Addu Atoll.

However, you can find sharks almost anywhere in the Maldives.

They can also be spotted throughout the year.

But they are most likely to be found during the dry season, from January to March.

What is the most common shark in Maldivian waters?

Although we do not know for certain which shark species is the most common one in the Maldives, it is quite possibly the black tip shark or the grey reef shark.

Will sharks become extinct in the north-central Indian Ocean?

It is highly unlikely.

However, many shark species have been listed as threatened or endangered by the World Wildlife Fund.

Their decline in population is largely due to overfishing and the destruction of their habitats (either directly or indirectly caused by human activity).

Fortunately, some shark species have been listed as protected species, and some conservation efforts have been made to protect their populations.