How Much Does It Cost to Live In Stockholm?

It is well known that the cost of living in Sweden is quite high and choosing its capital city as your future place of residence can be a good choice only if your salaries are high enough to cover the bills in the most expensive place in the country.

Being that in Stockholm salaries are higher than in the rest of the country, the basic costs of living are higher, too.

Like everywhere, your living costs will be based on your personal lifestyle.

Sweden : Cost of Living by City

Cost of Living in Sweden

Alcohol and restaurants in general are also quite expensive in Stockholm, compared to the rest of the country.

By taking a look at the prices, you can get an idea of how much it is necessary for a decent meal in an inexpensive restaurant.

Groceries and foodstuff are taking the great portion of your monthly budget and that is why you should purchase them wisely.

You can find them at lower prices at local markets or at discounts, which will save you pretty much money that can be used for some other expenses.

As in the whole country, transport is expensive in Stockholm, but if you purchase a monthly pass, public transport would become slightly more affordable.

It is good to know that children, students and senior citizens have a discount.

Driving here is not advisable due to the high gasoline prices.

When you think about the possibility of moving to Stockholm, you should think not only about getting a place to live, but also about providing enough money to pay the services which are not included in the price of the rent.

Even though it is more expensive than the rest of the country, Stockholm boasts affordable utilities prices.

Doing sports at the local fitness clubs and tennis courts in Stockholm can be costly, thanks to high number of people interested in exercising.

The weather conditions are not so great, thus affecting the prices of gyms.

The ticket prices for concerts and films are also quite high.

It cannot be said that Stockholm is a paradise for shopping.

Actually, designer clothing here is so unaffordable, that the majority of people spend money only on the necessary clothing items, and that spending does not exceed 3% of their monthly salary.

Rent prices are so high and it is advised to live in Stockholm’s suburbs rather than the city center, due to the fact that the standard of living is quite the same in both areas, but the suburbs are quite cheaper.

The difference in prices exceeds $500 per month.

How Does the Average Person Spend Their Money in Stockholm?

To help you get a better idea of how to organize your budget and how high salary to expect to get in Stockholm, so as to be enough for satisfying your needs and wishes, it is advised to take a look at Stockholm’s citizens’ personal finances and spending habits.

Renting costs are the highest here and take more than the third of the monthly salary.

The other thing of the utmost importance is food and transportation to work.

Quite high amount of money is spent in restaurants, even though they are pretty pricey.

Stockholm, being that it is the capital city, has the highest monthly incomes in the whole country.

That is why it is a frequent choice of people coming to live in Sweden.

However, bear in mind the fact that the highest salaries are followed by the highest monthly costs.

Paying more than $1500 for just the rent would be considered unaffordable by the majority of people who earn less than the average income.

The mortgage interest rates are not too high and buying a property would save you pretty much money here.

What About Travel Safety in Stockholm? 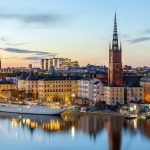 Cost of Living by City in Stockholm