How Much Does It Cost to Live In Puerto Rico?

Puerto Rico is a Caribbean island that, unfortunately, recently was battered by Hurricane Maria, which caused widespread destruction.

If you want to save up, most likely you will have to live outside the metropolitan area.

The amount of money you will spend in this country largely depends on many factors: for example, if you want to live in the so-called Metro area, the rent will eat up your budget.

Another thing is transport: in Puerto Rico, it’s really hard to get around without a car.

So think thoroughly about all these factors before you make a decision but if you want to live on a budget, it’s definitely possible too.

Prices in Puerto Rico are actually higher than in the U.S.A. The good thing lies in the fact that you can go to many local “kioskos” kiosks and for 2$ buy yourself some delicious fritters and soda. There are also many bars offering cheap beers and drinks: there’s lots of drinking here, since Puerto Ricans enjoy music and drinking on beaches. Domestic beer will cost you only 2$.

Many foods and fresh produce in supermarkets are imported, and they can only come from mainland U.S. because of Puerto Rico’s status and laws in the books that still persist today. The price for milk, eggs, and other local goods is regulated by local government and is actually fixed at prices that are higher than in many U.S. destinations.

Power utility company has a monopoly on the island so the utilities are actually through the roof. Internet service is also rather expensive, costing around 60$ per month for 8 or 10mbps. Electricity is super expensive (near 200$ for a 85m2 apartment), so most houses don’t have A.C. and if they do, they’re usually located in their bedrooms. Apart from the fact that electricity is so expensive, black outs happen constantly.

Entertainment is slightly cheaper in comparison to everything else, though it depends largely on where you go and what you like to do, of course. Going to the movies for example is relatively cheap, with one ticket costing around 7$. If you like to spend your free time in a gym or a fitness club, your monthly fee will be around 35$.

If you want to spend your free time in a shopping mall – there are plenty of those in Puerto Rico! There are also many shops on its streets, and the best part is that the prices of clothing are very low. You’ll be able to buy quality jeans for around 40$, while quality running sneakers cost a bit more – around 80$ a pair.

Compared to everything else, the prices of rent are not exactly through the roof. Of course, they vary from city to city and region to region, but all in all, you’ll be able to get a decent place for around 400$. If you want to go closer to the center of any of the major cities, the prices go up and it will cost you around 500$, and if you have your family with you – a larger apartment will cost you 1000$.

How Does the Average Person Spend Their Money in Puerto Rico?

Food is a large expense for the people living in Puerto Rico, taking up more than 38% of one’s salary.

This is normal for most countries of the world.

The second biggest expense in Puerto Rico are the rents, though they aren’t that expensive, in comparison with other prices in the country.

Restaurants are always in the top four biggest expenses because there are many people who eat in them three times a day.

Transportation is also an everyday necessity for most people so it’s no wonder that 10% of one’s income is spent on buses, trains and trams.

Clothing takes up the least of an average person’s income, as in most countries.

Salaries are, however, a great surprise give how high they are!

With an average salary of around 1800$, people of Puerto Rico can live relatively comfortably, even with the high prices throughout the country.

Even though the rent is high and the utilities are through the roof, most people can afford to pay them and still have something left on the side.

The minimum wage in Puerto Rico is around 1100$, and even with the minimum wage, most people will be able to afford all basic expenses.

What About Travel Safety in Puerto Rico? 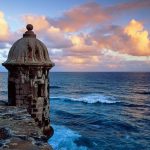 Cost of Living by City in Puerto Rico