How Much Does It Cost to Live In Luxembourg?

Luxembourg is one of the most expensive countries in all of Europe, so if you’re planning to come here, count on spilling out a lot of money.

If you want to live here you should know that living as a single person that goes out during weekends, eats out occasionally, has an average social life, uses public transport, and lives in a one-bedroom apartment, you can live for a month with around 2000$, but that’s if you live on a tight budget.

A rule of thumb is that if your salary is above the average then you are not very far from the better half.

Luxembourg : Cost of Living by City

For instance, if you want to eat out, it’s best to eat in a restaurant at lunchtime and take the plate of the day.

If you add beer, coffee, or a soft drink that will be around 3$.

This is actually great value for money since the same meals in the evening cost 50% to 100% more.

Normal food in supermarkets, (like vegetables, meat, dairy products, and definitely no organic food) should be around 150$ a week for a single household.

There can be huge price differences between shops so it’s best to either ask around which one is the cheapest or just head to the known chain markets.

Transportation is also pretty costly in Luxembourg and it might be a good idea for everyone to just buy a monthly pass for public transport because it costs around 30$ which is not that expensive for a country like Luxembourg, while a one-way ticket costs almost 3$, so a monthly pass would pay off way more.

Utilities are almost twice as expensive as in less prosperous European countries.

If you live in an apartment that’s a bit larger – for instance, 85m2 – your basic utilities, including gas, heating, cooling, electricity, garbage services, and water will cost you around 264.09$.

Internet is also very expensive, costing around 56$ a month.

Leisure activities like going to the movies are actually not as expensive as you’d expect in one of the most expensive countries in Europe.

One ticket is around 14$ for the cinema.

If you want to be a member of a fitness club or a gym it will cost you around 46.57$ a month, while renting a tennis court for just an hour costs around 23$.

By now, you already know that life in Luxembourg is expensive, and so is shopping for clothing.

Here you have to really set aside a lot of money if you want to buy just basic clothes.

For example, quality jeans like Levi’s will cost almost 85$, as well as running sneakers from brands like Nike.

In general, the most expensive thing about living expenses is the rent or housing mortgages.

The closer you live to the center, the more expensive the rent gets.

If you want to find a cheap one-bedroom apartment in Luxembourg and are ready to live on the outskirts of cities, you will have to pay a whopping 1400$.

How Does the Average Person Spend Their Money in Luxembourg?

Rent is definitely the biggest expense for everyone living in Luxembourg, but taking into account the high standard in this country and their average salaries, it is doable to live in a rented apartment.

The next thing an average person spends their money on in Luxembourg is food – with around 200$ a week being spent only on groceries.

The pricey restaurants also draw a lot of funds from citizens of Luxembourg, while utilities and transport take up only about 6% of all monthly funds.

Luxembourg has an extremely high standard of living, and it is, along with Switzerland the most expensive country in Europe.

Even with extremely high rent prices of around 1500$, their average salaries are high enough to cover all expenses and live in a rented apartment.

General advice for tourists and ex-pats is to set aside around 2000$ a month in order to live in Luxembourg on a tight budget.

What About Travel Safety in Luxembourg? 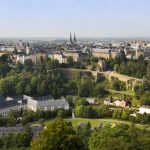 Cost of Living by City in Luxembourg