How Much Does It Cost to Live In Croatia?

Today Croatia is known as a really attractive travel destination that has gained popularity since Independence Day.

The Mediterranean nature with its mountains, green slopes, shores, and man-made buildings made Croatia one of the outstanding places to be.

The diversity of the country and its geopolitical changes had a great impact on the economy.

Tourists from Eastern Europe should expect to spend more.

At the same time, most of western Europeans and Americans might feel pretty rich staying in this country.

Croatia : Cost of Living by City

Having a three-course meal for two in a mid-range restaurant costs around $42 (against a $7 meal in McDonald’s or similar).

Talking about drinks, a small bottle of imported beer is $2.86, which is 30 cents more than Coke or Pepsi.

$1 can buy you one pound of white rice, apples, bananas, oranges, or tomatoes.

With $0.50 in your pocket, you can still afford a pound of potato or onion.

Love driving and want to buy a car in Croatia?

Monthly utilities that Croatians usually pay for include the connection to the Internet and local calls with a cell phone.

In fact, a good deal of people’s income goes to public facilities.

Working out in Croatia is presented by fitness clubs and tennis courts which tend to be the most trendy places.

According to statistics, fitness gets the upper hand against tennis: a monthly fee for 1 adult is $41.03.

Or rent a tennis court for three hours on weekend.

Businessmen rule the world and increase the economy.

If you are one of them, be ready to pay for your image in Croatia.

Just a little bit more expensive than a pair of Nike running shoes or most of the Levis jeans.

By the way, summer dresses are half-price so give them a try.

This is what students, tourists, ex-pats, and many locals would be interested in.

Rental prices are quite acceptable for people with average wages if they are ready to pay half their monthly income for rent.

The one-bedroom premises in the city center cost $100 more than those outside the downtown.

Add $260 more to starting price to rent a three-bedroom apartment in the center.

How Does the Average Person Spend Their Money in Croatia?

Interestingly, people in Croatia spend the biggest part of their money at the markets and paying bills.

The least goes for clothing and shoes.

If you want to calculate your expenditures in advance, note these facts: the three biggest money eaters in Croatia are eating, driving, and rental.

Locals usually do not pay much for sports and leisure, clothing, shoes, and utilities.

If you want to be like the average person in Croatia, rent an apartment in the city center, buy food in the markets, eat out often, and take a taxi back home.

The National Minimum Wage is the smallest sum of money an employer pays in accordance with the law to his employees per month, per day, or per hour.

The lowest wage permitted by Croatian law increased by 5% in the recent reporting period.

Among 97 countries that are ranked by the lowest minimum monthly income amount, Croatia is placed 33rd.

As to the mortgage interest rate, it makes an average of 4.77% yearly.

What About Travel Safety in Croatia? 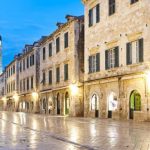 Cost of Living by City in Croatia