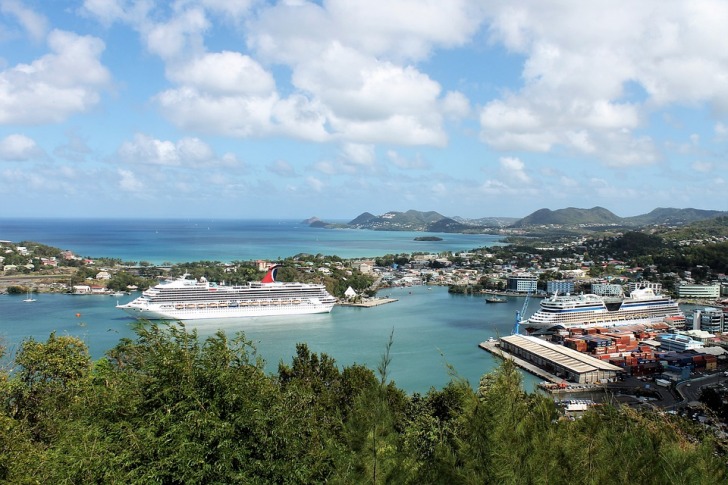 An island country in the Caribbean Sea, Aruba is famous for its sun-kissed beaches, spectacular desert landscapes, colorful architecture, and vibrant social scene.

But if there is one thing people visit “The Island of Giants” for, it is to swim at the dazzling world-renowned white beaches on Aruba’s western and southern coasts.

However, some visitors may have concerns about swimming in Aruba’s glistening ocean waters.

One common concern is the possibility of shark attacks.

This is a very valid concern.

Fortunately, we have everything you need to know about sharks in Aruba and the measures you can take to have a fun and safe vacation there.

So… Are There Sharks in Aruba?

Although sharks do indeed inhabit the Caribbean waters around Aruba, shark attacks on humans are extremely rare.

According to the Shark Research Institute, there has only been one reported shark attack in Aruba since 2015.

That means from 2016 to the present day, there have been zero recordings of shark attacks in the country.

Currently, there are 20 known species of sharks around the Dutch Caribbean islands, including reef sharks, blacktip sharks, and tiger sharks.

These are some of the shark species that can be found around Aruba.

Reef sharks, which can grow up to 10 feet in Aruba, are commonly found in coral reefs.

An apex predator, they have a direct or indirect impact on all levels of the food chain, helping maintain structure in the ocean’s ecosystems.

In fact, the World Wildlife Fund has listed them as one of the planet’s most important species.

Although reef sharks can be a threat to humans, they are more likely to be killed by humans (for meat, liver oil, leather, etc.) than vice versa.

For the most part, the reef shark avoids human interaction whenever possible, so they are unlikely to pose a threat to swimmers, snorkelers, and scuba divers.

Known for being the world’s largest fish, the whale shark can grow up to 32 feet in length.

Despite their intimidating size, whale sharks are extremely harmless animals that are of little to no threat to humans.

They are actually quite social around humans, often letting humans ride on their fins.

Although they usually live offshore, they can sometimes be spotted in lagoons or atolls.

With their narrow throats, they typically only feed on tiny marine animals.

These marine creatures, which prefer living in shallow waters, can often be spotted in fairly shallow areas (with depths not exceeding 100 feet, or 30 meters).

Known for the black “tip” on their fins, these sharks are quite small, only reaching a length of around 4 to 5 feet.

But they are fast and powerful swimmers that sometimes jump out of the water to snatch their prey.

Nurse sharks are a bottom-dwelling species that typically inhabit tropical and subtropical waters, such as the Caribbean Sea.

They can grow up to 14 feet in length and weigh as much as 730 pounds.

A harmless animal to humans, the nurse shark can be spotted under ledges and inside crevices on coral reefs.

Although not as imposing in size as the whale shark, the tiger shark is fairly large, growing up to 16 feet in length.

Identifiable by their blue to green colored bodies, wedge-shaped heads, long fins, and high backs, tiger sharks can be spotted by scuba divers in the Caribbean and other tropical waters.

Their young have dark spots and stripes that fade over time.

Is it Safe to Swim in Aruba?

Yes. Aruba welcomes hundreds of thousands of tourists every year.

In 2019, Aruba saw 838 thousand tourists from all over the world, many of which had made their way over to enjoy the country’s gleaming white-sand beaches.

Popular activities include riding ATVs, scuba diving, and snorkeling, to name a few.

Although scuba diving and snorkeling are at the top of many tourists’ lists, there are some important things they need to consider:

Although they are the apex predator of their food web, they pose little to no danger to humans.

A human is more vulnerable to being attacked by a reef shark if the shark feels threatened.

In such situations, the shark might bite their victim, giving them lacerations.

Many shark species in Aruba and the Caribbean are threatened.

Overfishing and habitat destruction (such as the obliteration of coral reefs and mangrove forests) has been detrimental to the livelihoods of sharks and other marine animals in the Caribbean.

Delegates from 14 Caribbean nations, such as Aruba, Curaçao, and St. Maarten, have convened to discuss ways to protect the Caribbean Sea’s waters and biodiversity under the SPAW Protocol.

Sharks migrate along the Caribbean.

Although scientists still have a lot to learn about the birthing locations and migratory patterns of sharks, they do know that sharks migrate along this body of water between the months of May and September.

Although no exact reasons have been confirmed, scientists believe that sharks migrate in order to optimize growth and expand foraging options.

Salt, after all, is required for their survival.

Without salt in their bodies, their cells would quit functioning, which would lead to bloating and eventually dying.

Because of this dependence on salt, sharks mostly live in saltwater environments.

Since the Caribbean is a saltwater sea, this body of water is quite conducive to sharks.

And sharks do indeed inhabit the Caribbean Sea — 20 known species of sharks in fact.

But contrary to popular belief, sharks do not frequently attack humans in the Caribbean.

Humans are more susceptible to shark attacks when sharks feel like they are trapped with no way to escape.

Even then, human fatalities are quite rare, with curable lacerations often being the worst result of shark attacks.

Let’s get back to the island…

Here is our safety review of Aruba: 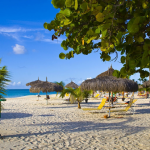 Aruba is a famous vacation destination known for its sunny white-sand beaches, which are ideal for sunbathing, snorkeling, and scuba diving.

Sharks that inhabit the waters around Aruba include the reef, whale, black tips, nurse, and tiger sharks, with the reef shark being the most common.

As long as swimmers practice safety measures (e.g., swimming in groups, wearing water booties, staying close to shore), they will be able to swim with little to no risk for their safety.

Since sharks have adapted to inhabit saltwater environments and since the Caribbean is a saltwater sea, sharks do live in this body of water.

However, contrary to what many may think, sharks in the Caribbean and in Aruba are mostly harmless to humans.

Some sharks, in fact, such as the whale shark, enjoy human company and are known to play with casual swimmers.

How many people die every year from shark attacks in Aruba/the Caribbean?

Shark attacks are a rare occurrence in the Caribbean.

In Aruba, for example, there has only been one reported shark attack since 2015.

That means that from 2016 to now there have been no shark attacks in the country.

A person’s chance of falling victim to a shark attack is much higher in places like South Africa, which has seen 90 fatal attacks since the 1940s.

This averages to about 1.1 fatalities per year in South Africa, which is still quite low considering the large number of people that swim there.

Which Caribbean island has the most shark attacks?

The Bahamas sees the most shark attacks out of all the Caribbean countries, with 35 attacks since 1896.

This translates to about 1 attack every 3.6 years.

The number, despite being the highest in the Caribbean, is still extremely small.

It goes to show that, although shark attacks are a common concern among swimmers, they are actually quite a rare occurrence.

In fact, sharks are much more likely to be killed by humans than the other way around.

Due to overfishing and the loss of vital habitats (including coral reefs), sharks have been experiencing a steep decline in their populations.

This is a worldwide phenomenon that extends to the Caribbean.

Sharks, who already experience slow population growth due to slow maturation and reproduction rates, are rapidly declining in numbers, largely due to human activity.

Although it is highly unlikely that sharks in the Caribbean or anywhere else will become completely extinct, more measures definitely need to be taken to protect shark species in Aruba/the Caribbean and all over the world.